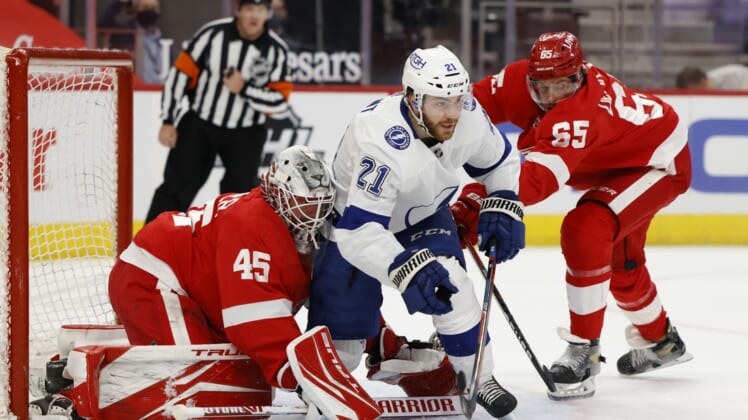 Blake Coleman tallied a goal and an assist and goaltender Christopher Gibson won for the first time in more than three years as the Tampa Bay Lightning claimed a 2-1 road win over the Detroit Red Wings on Sunday afternoon.

Mikhail Sergachev also scored for the Lightning (35-14-3, 73 points), who moved up to second place in the top-heavy Central Division. The Lightning are tied with the Florida Panthers but have played one fewer game. Both teams are two points back of the first-place Carolina Hurricanes.

Gibson, Tampa Bay’s third-string goalie, made 22 saves to earn his first NHL victory since March 20, 2018, while a member of the New York Islanders.

Filip Zadina scored the lone goal for the Red Wings (18-27-9, 45 points), who received an outstanding 40-save performance from goaltender Jonathan Bernier to give them a chance for consecutive wins over the defending Stanley Cup champions.

After being blanked by the Red Wings in a 1-0 shootout the day before, the Lightning were looking for a quick strike and received it when Coleman opened the scoring 16 seconds into the affair. Barclay Goodrow intercepted Filip Hronek’s pass attempt at the end boards and sent the puck to the slot for Coleman to convert with a quick one-timer for his 13th goal of the season.

Despite dominating play in the opening frame to the tune of a 19-6 shot margin, the Lightning didn’t double the lead until Sergachev collected his third goal of the season 69 seconds into the second period. With a screen in front, his long wrister from the point found the mark.

The Red Wings, long eliminated from playoff contention, hung tough and were rewarded when Zadina put them on the board. Seconds after Bernier made an excellent save, Zadina joined a four-on-two rush and completed a give-and-go with Vladislav Namestnikov before burying the shot in the net his sixth goal of the campaign.

Detroit had a golden chance to draw even when the Lightning found themselves in penalty trouble in the third period, with three successive infractions that gave the Red Wings more than two minutes of a five-on-three advantage. However, the hosts couldn’t convert during the series of power plays.