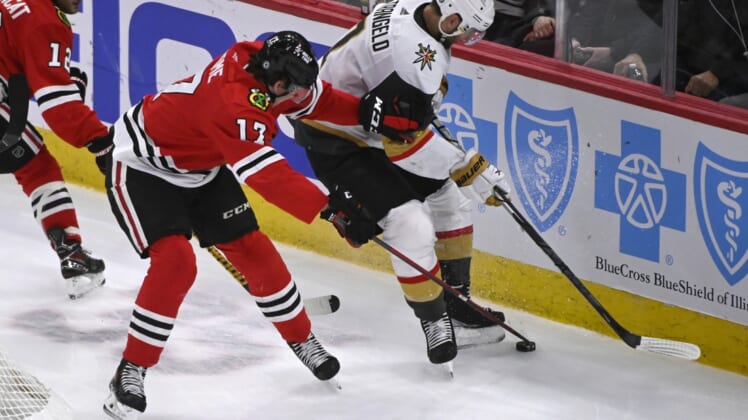 Tyler Johnson scored the winner in the seventh round of the shootout and Taylor Raddysh scored two goals as the Chicago Blackhawks ended the playoff hopes of the visiting Vegas Golden Knights with a 4-3 shootout victory on Wednesday night.

Johnson circled in from the left side and then fired a wrist shot top corner past Vegas goaltender Logan Thompson’s stick side to start the seventh round. Michael Amadio had a chance to force an eighth round but his backhand try was stopped by Chicago goaltender Kevin Lankinen, who made 37 saves and proved flawless against all seven shootout tries.

The loss was the third consecutive defeat by shootout for Vegas, which failed to convert on all 17 of its attempts in those losses.

It marked the first time in the franchise’s five seasons that the Golden Knights failed to make the playoffs. The Dallas Stars clinched the final Western Conference playoff berth by garnering a point in a 4-3 overtime loss to visiting Arizona.

It was the first two-goal game of the rookie Raddysh’s career. Caleb Jones also scored for Chicago (28-42-11, 67 points), which was playing its final home game of the season. Sam Lafferty added two assists.

Max Pacioretty, Amadio and Alec Martinez scored goals and Chandler Stephenson had three assists for Vegas (42-31-8, 92 points) which lost for the fifth time in six games (1-2-3). It was the third career three-assist game for Stephenson. Thompson finished with 37 saves.

Chicago took a 1-0 lead at the 16:01 mark of the first period when Raddysh stole the puck from Shea Theodore along the right boards and drove in and banked in a shot off Thompson’s right leg.

Vegas tied just 1:38 later when Amadio one-timed a Theodore setup from the bottom of the left circle past Lankinen’s stick side for his 11th goal of the season.

Raddysh put the Blackhawks back ahead 2-1 with just 2.8 seconds left in the period when he put in his own rebound for his 11th goal of the season.

The Golden Knights tied it early in the second when Martinez fired a wrist shot from the point over Lankinen’s glove and into the top right corner for his third goal of the season.

Jones put Chicago past ahead just 66 seconds later when he intercepted a Jack Eichel pass in his own zone and then ripped a shot from the hashes past Thompson’s blocker side for his fifth of the season.

Pacioretty tied it 3-3 at the 17:12 mark of the period when he deflected Brayden McNabb’s shot from the left point past Lankinen for his 18th goal of the season.