Blackhawks visit Vegas with an eye on future fortunes 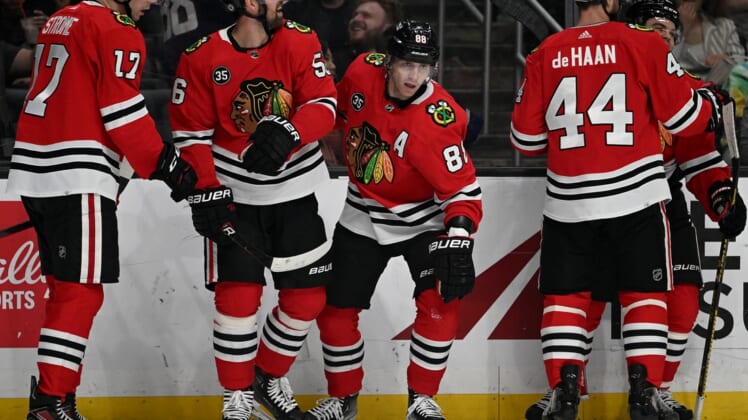 The Chicago Blackhawks will try to complete a sweep of their three-game Western road trip Saturday afternoon when they face the Vegas Golden Knights in Las Vegas.

Chicago opened the trip with a 4-2 victory at Anaheim on Wednesday and followed that the next night with a 4-3 shootout victory in Los Angeles. The two wins came after a busy trading weekend that saw the team deal reigning Vezina Trophy winner Marc-Andre Fleury to Minnesota, forward Brandon Hagel to Tampa Bay and center Ryan Carpenter to Calgary for a bevy of draft picks, including three potential first-rounders.

Still, the Blackhawks, who are seventh in the Central Division and 18 points behind Dallas for the final Western Conference wild-card spot with just 17 games remaining, continue to play hard with an eye toward the 2022-23 season.

Forward Patrick Kane had two goals and three assists in the first two games on the trip. Forward Alex DeBrincat added two goals and two assists, scoring the winner in Thursday night’s shootout to give him 36 goals on the season, tied for sixth in the NHL.

“As a team, we’re trying to form this identity of how we want to play and how we want to be moving forward,” DeBrincat said. “I think these past two games have been a pretty good showing for us. We just got to keep working hard.

One bright spot has been the goaltending without Fleury. New No. 1 Kevin Lankinen had 27 saves in the win over the Ducks while Collin Delia, making his second start of the season, had 43 saves and stopped all three shootout tries against the Kings.

It was a special night for Delia, who had been yanked after facing just seven shots and allowing three goals in his only other start of the season, a 6-1 loss at Nashville on New Year’s Day. The native of Rancho Cucamonga, Calif., who grew up rooting for the Kings and goalie Jonathan Quick, outdueled his idol in front of family and friends while picking up his ninth career NHL win.

“It’s hard to put into words,” Delia said. “It’s just really cool to be from this area, grow up watching the Kings, Ducks, especially Jonathan Quick, and get to compete with some really good company and come out victorious. Definitely a memorable experience.”

Vegas trails Dallas by one point for the final wild-card spot but the Stars still have four games in hand. The Golden Knights, who begin a stretch of seven games against teams currently out of the playoffs, are 3-7 over their past 10 games. All seven of the losses came on the road where they were outscored 30-11.

However, the Golden Knights are 3-0 at home during that stretch, including a 6-1 blowout of Nashville on Thursday.

Evgenii Dadonov, who saw his salary-dump trade to Anaheim on Monday nixed by the NHL because it violated the limited no-trade clause in Dadonov’s contract, decided to rejoin the salary-cap strapped Golden Knights and had a goal and two assists against the Predators.

“I would say it was a stressful couple of days,” Dadonov said. “Nothing I could do. I was just waiting on the decision.”

Dadonov received a huge ovation from the sellout crowd of 18,021 when it was announced he would be starting the game.

“I felt the support from the fans,” Dadonov said. “It probably pumped me up even more. I’ve always liked playing here, even when I was in Florida. I think they’re the best fans in the league.”

Vegas coach Peter DeBoer said after practice on Friday that center Brett Howden, who was stretchered off the ice in the first period after crashing into the boards head-first on a Filip Forsberg check, was at the facility and out of the hospital but would probably be out “for a while.”

Left wing Max Pacioretty, expected to return to the lineup as soon as Saturday, suffered a setback during the workout and DeBoer said he won’t be available “in the near future.”