Blackhawks look to get well vs. defenseless Ducks 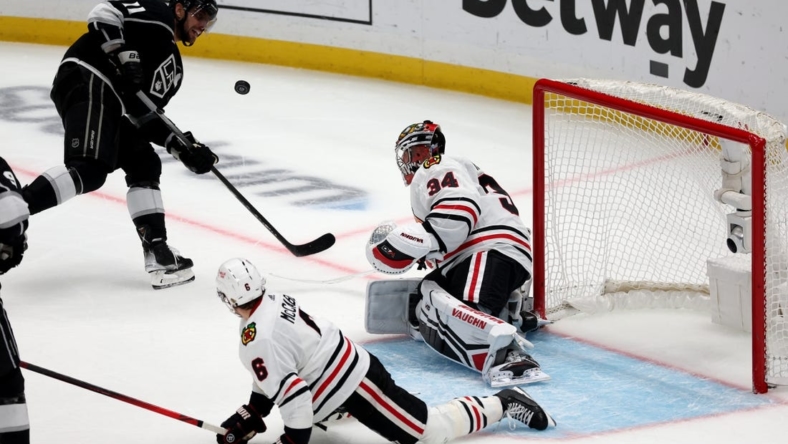 With their optimistic start all but a memory at this point, the Chicago Blackhawks stumble into a road matchup against the Anaheim Ducks on Saturday.

Since a four-game winning streak last month, the Blackhawks have just one victory in their past seven games. They are 1-3-3 since Oct. 27 and have lost twice on the current road trip that ends Saturday.

The most recent defeat came Thursday when they dropped a 2-1 overtime decision to the Los Angeles Kings.

The Blackhawks have managed just four goals over the past four games, with two of those coming in a 2-1 victory over the Kings at home on Nov. 3. Los Angeles made its revenge extra spicy, getting the game-winning goal from Kevin Fiala with 1.4 seconds remaining in the extra period.

The good news for Chicago is that goalie Petr Mrazek returned from an eight-game absence (groin injury) to stop 31 shots. Taylor Raddysh had the lone goal for the Blackhawks.

Chicago was constantly pinned in its own zone under relentless pressure and stayed in the game thanks to Mrazek’s heroics.

“Just try to do everything you can to not prolong those shifts before you get caught in our own zone,” Chicago’s Max Domi said. “… (We have) just got to work on closing plays a little quicker, both forwards and (defenders). Just a little more communication will solve that problem.”

Getting shift changes while under constant bombardment has been a particular issue.

“(When) you’re not moving your feet and you turn the puck over in the neutral zone or at the blue line and it comes back in your zone, those little plays everywhere on the ice are important,” Blackhawks head coach Luke Richardson said. “Just little chips in the neutral zone to get guys off the ice.”

Creating offense might come a bit easier against the Ducks, who have allowed an NHL-worst 65 goals and minus-25 goal differential.

The Ducks dropped a 4-1 decision to the Minnesota Wild on Wednesday after averaging 4.6 goals a game during a four-game stretch.

The Ducks have scored a respectable 40 goals this season and are getting highlight-worthy performances from Troy Terry (team-high 17 points) and Trevor Zegras (team-high seven goals), with Zegras’ most recent effort at a wraparound lacrosse-style goal Wednesday notable even though it was erased on replay because of offsides.

Gibson has allowed 15 goals in his last three starts, including seven against the Vancouver Canucks on Nov. 3.

Making matters worse is that the Ducks lost a pair of defensemen — Kevin Shattenkirk (lower-body injury), Nathan Beaulieu (upper body) — in the defeat to the Wild and finished the game with just four defensemen.

“We’ve been saying a lot of the right things but our results and what we’re doing on the ice isn’t where we need it to be,” Ducks defenseman Cam Flower said. “That’s just a product of letting the game get away from you a little bit. Putting yourself in penalty trouble against any team is a recipe for disaster.”

LAFB Network - LA Football Show: Matthew Stafford Career In Jeopardy?? | Darrell Henderson No Longer A Ram | What Is Going On?