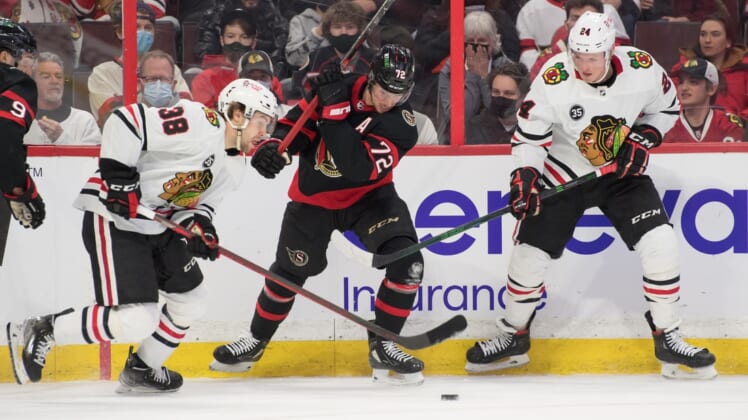 Chicago outscored Ottawa 6-1 over the final two periods to back a 20-save effort from goaltender Marc-Andre Fleury.

The spurt included Jones’ first career multi-goal game and featured a tally in which Jones’ brother, Seth, notched one of his two assists.

Patrick Kane had three assists and Jake McCabe added two. Sam Lafferty scored what proved to be the game-winner at 15:49 of the second period. Dylan Strome closed the scoring midway through the third, netting his seventh goal in the past five games.

Anton Forsberg made 22 saves for the Senators. Nick Paul tied the game for Ottawa at 15:41 of the third, but Lafferty responded eight seconds later, and Chicago added two more goals in a 1:09 span in the third.

Ottawa has been outscored 74-41 in the third period this season.

Chicago endured a scary sequence early in the game, as defenseman Connor Murphy was taken off the ice on a stretcher after being boarded into the glass by Ottawa’s Parker Kelly just 2:40 into the game. Kelly was assessed a game misconduct for the hit, which pressed Murphy’s against the glass as he raced toward the Ottawa end line in pursuit of the puck.

Murphy gave a thumbs up as he exited on the stretcher. He sustained an upper-body injury on the play and did not return. According to the Blackhawks, Murphy remained at Canadian Tire Centre, under close supervision of the Chicago medical staff.

With Adam Gaudette serving the five-minute major to Kelly, the Senators broke through for a shorthanded goal to open the scoring. Skating in on a 2-on-1, Connor Brown beat Fleury with a wrist shot at 3:18 of the first period. Thomas Chabot extended the Ottawa lead to 2-0 just less than 11 minutes later.

Toews erupted for two goals in the first 2:39 of the second period to tie the game. Kane assisted on both tallies and later added another assist to reach 1,156 career points, passing Bobby Hull for second on the all-time franchise list.

Chicago’s Tyler Johnson missed the final two-plus periods in concussion protocol after taking a puck to the side of the head.