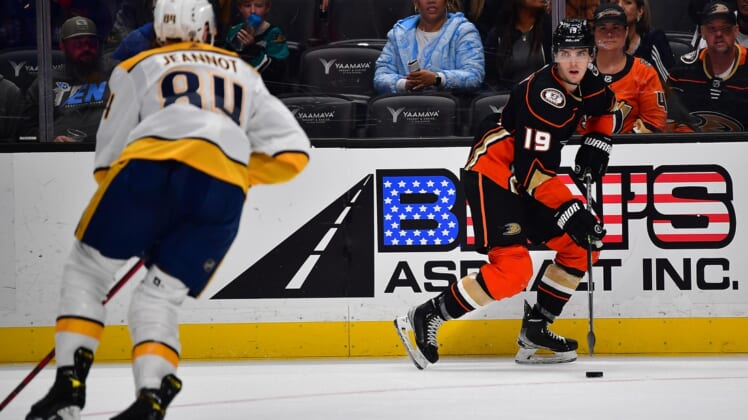 Two teams in the middle of losing streaks who went into full rebuild mode at the trade deadline will face off Wednesday night when the Chicago Blackhawks visit the Anaheim Ducks.

Chicago, which is in seventh place in the Central Division, has lost three straight (0-2-1) and six of its last eight games (2-5-1) and was 19 points out of the final Western Conference playoff spot entering Tuesday’s action.

Raddysh already paid dividends in Chicago’s last game on Sunday, scoring a goal and garnering an assist in a 6-4 loss to Winnipeg.

“I think he shows he can make plays and probably didn’t get much of a chance in Tampa,” said forward Alex DeBrincat. “Hopefully he gets a better chance here.”

Chicago led the Jets 2-1 early in the second period on goals by Jonathan Toews and Dylan Strome before Winnipeg scored four straight times before the end of the period to take a 5-2 lead. Goals by Raddysh and Philipp Kurashev cut the Jets’ lead to 5-4 in the third before Blake Wheeler sealed it with an empty-netter.

“Going in the rest of the way, this is on us,” Chicago coach Derek King said. “We have to compete and play the right way for three periods. We didn’t do that tonight and it cost us.”

Anaheim and new GM Pat Verbeek were also busy acquiring draft picks at the deadline even though the Ducks, despite being in the midst of a seven-game losing streak (0-5-2), trailed Vegas by just seven points for the final wild-card spot at the beginning of Tuesday’s action.

Verbeek dealt defenseman Josh Manson to Colorado on March 14, defenseman Hampus Lindholm to Boston and forward Nicolas Deslauriers to Minnesota on Saturday and forward Rickard Rakell to Pittsburgh on Monday. All were impending unrestricted free agents.

As a result of the deals, Anaheim now has two first-round and two second-round picks in the upcoming NHL draft, followed by as many as seven picks in the first three rounds in 2023.

Anaheim also added centers Zach Aston-Reese and Dominik Simon and goalie Calle Clang in the deal with the Penguins.

“I was hired to run the team and that’s how I went into it, to try and make the team better,” Verbeek said. “We’re going to go down a different path and try and build this team and give this team a real chance.”

Two players Anaheim figures to build around, 24-year-old forward Troy Terry and 21-year-old center Trevor Zegras, both reached milestones in the team’s 6-3 loss to visiting Nashville on Monday. Terry became the 10th player in franchise history to score 30 goals in a season while Zegras had to two assists to give him 30 for the season, tying Cam Fowler’s rookie record.

“It’s cool. I’m not going to lie to you,” Terry said. “It’s a goal I had coming into this year. … It was nice to hit that number (but) it’s hard to think about it the way that we lost that game tonight.”