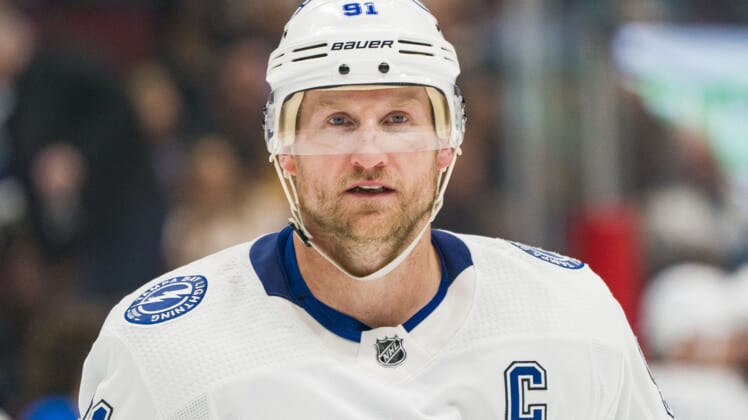 When Tampa Bay plays host to the Chicago Blackhawks on Friday, the Lightning know they can rely on Steven Stamkos in the clutch.

In Tampa Bay’s 4-3 overtime win against the visiting Carolina Hurricanes on Tuesday, the captain proved to be as dependable as ever while reaching a pair of milestones.

The game-winning goal from the slot just 52 seconds into the extra session was Stamkos’ 11th overtime goal, the most in franchise history.

The tally marked the seventh time in the 32-year-old forward’s career that he had reached the 30-goal plateau, breaking a tie for the franchise mark with former teammate Martin St. Louis.

Tampa Bay rallied from three one-goal deficits Tuesday against the Metropolitan Division-leading Hurricanes, with Stamkos putting the finishing touches on the victory at the end of a sharp give-and-go passing play with Nikita Kucherov.

“We’ve been working on the four-on-three (power play), and the mindset was just to get more shots on net,” said Stamkos, who has 73 points in 65 games. “Kuch is one of the best playmakers in the league. When he gets the puck in those situations, usually good things happen.”

The power play played a large role in the response.

The Hurricanes entered the game with the NHL’s top-ranked penalty-kill unit, denying scoring chances at a rate of 89.4 percent.

However, the Lightning figured out the gaps, going 3-for-4 on the man advantages. Alex Killorn, Brayden Point and Stamkos notched power-play goals for Tampa Bay, which owns a three-game winning streak. The Lightning sit in third place in the Atlantic Division, one point behind the second-place Toronto Maple Leafs.

“We’re starting to see dividends on what we were doing before,” Cooper said.

Just under a month ago, the Blackhawks lost 6-3 at home against the Lightning after holding a pair of one-goal leads.

Against the Atlantic Division-leading Panthers on Thursday, in the first game of a back-to-back set, Chicago was stonewalled by Florida goalie Sergei Bobrovsky, who made 37 saves in a 4-0 win.

The Blackhawks dropped to 1-9-2 in the first match of a back-to-back situation. They are 3-5-3 in the second of consecutive games.

They also slipped to 2-4-2 in their past eight contests, although goalie Collin Delia played well, stopping 40 shots.

The Blackhawks were outscored 2-0 in the middle period at Florida, but interim coach Derek King still liked what he saw as Chicago outshot the Panthers 16-11.

“That second period was probably one of our better second periods in a long time,” King said. “We just couldn’t get it by their goalie. He stood on his head. We had numerous opportunities point blank, and they were just not going in.”

The Blackhawks have surrendered at least four goals in each of the past three games, and they have yielded an average of 4.3 goals over the past six games.