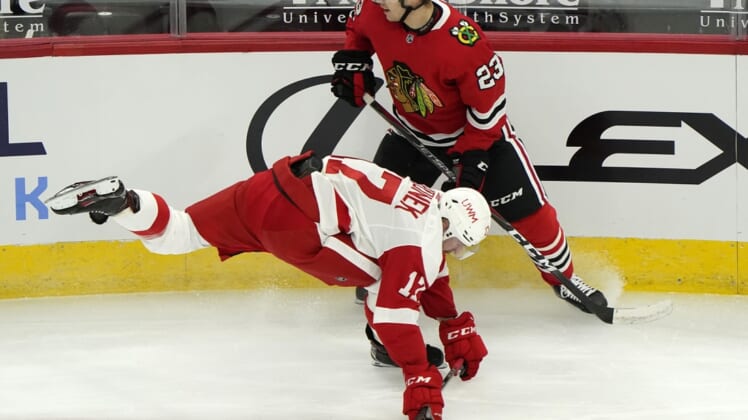 A potent power play propelled the Chicago Blackhawks to their first victory of the season after emerging as a constant in four previous defeats.

“The movement in general has been a lot better, and there’s a lot of options, especially for me, the way the hands are set up,” Blackhawks forward Patrick Kane said.

Chicago has converted 7 of 17 opportunities on the power play entering Sunday’s home matinee against the Detroit Red Wings.

The Blackhawks skated to a 4-1 win over the Red Wings on Friday night in the first leg of a back-to-back at the United Center. Kane opened the scoring with a power-play goal in the first period, while Andrew Shaw added a goal on the man advantage to extend Chicago’s lead to 3-0 early in the third.

Captain Dylan Larkin thwarted the shutout bid of goaltender Kevin Lankinen, who stopped 30 of the 31 shots he faced in his second career start.

Larkin’s goal in the third period may have sullied Lankinen’s stat sheet, but it hardly impacted his mood on the heels of his first NHL victory.

“It feels great. I mean, what can I say?” Lankinen said. “Friday night in Chicago, home opener at the United Center, get your first NHL win. Only the fans were missing. That (stinks), but other than that, it feels awesome.”

Larkin has three goals and two assists in his last four games, while defenseman Marc Staal contributed the primary assist to net his first point as a member of the team.

“I thought our start was good; we just didn’t get the puck past the goalie,” Larkin said. “We made it a little too easy on him to get comfortable there to start. I thought we forced it too much, and we gave them too much needless turnovers.

“I liked our start. We knew going in that it’s not a normal year. We’ve got to be ready for the unexpected. A little adversity came our way. I thought we showed up, but we just didn’t have it tonight.”

Although the Red Wings outshot the Blackhawks 31-27, Chicago’s penalty kill stifled each of Detroit’s five power plays on Friday.

“We’ve got to put onus on the five guys out there and expect more,” Larkin said. “We’ve got to become a dangerous unit. It’s kind of a slow night, and your power play’s got to show up.”

The Blackhawks also opened the 1993-94 season with five successive games with at least one power-play goal. The 1990-91 team holds the franchise record with 11 straight, while the 1965-66 club accomplished the feat in six consecutive games.

Strong special teams and resilient goaltending typically spell a sound combination for success, one the Blackhawks will hope to sustain on Sunday.

“Everyone wants to have a good feeling when you leave a rink,” Chicago coach Jeremy Colliton said. “Of course the performance can be better, but we did some good things, but it’s a lot easier to build on that when you get a victory.”