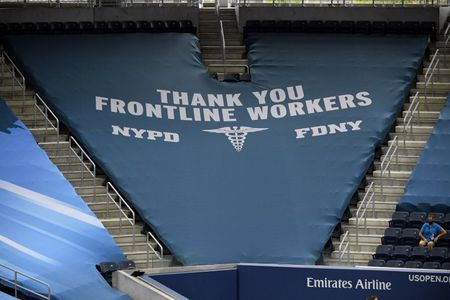 NEW YORK (Reuters) – Large banners with the words “Black Lives Matter” were removed from Arthur Ashe Stadium at the U.S. Open on Tuesday as part of a routine rotation and replaced with signage honoring “frontline workers,” including the New York City Police Department (NYPD).

The tournament said the banners would be changed periodically, as it plans to honor a variety of issues and causes, including LGBTQ rights and gender equality throughout the Grand Slam in Flushing Meadows.

“We are utilizing the 2020 US Open as an opportunity to bring awareness to a variety of causes and initiatives,” a tournament spokesman said. “This includes what will be a rotation of the scrim design in both Arthur Ashe Stadium and Louis Armstrong Stadium, throughout the event.”

Black Lives Matter, which advocates against police brutality against Black people, has taken a central role in North American sports, most recently after the police shooting of Jacob Blake, a Black man in Kenosha, Wisconsin. Athletes protested and leagues including the NBA and WNBA shut down in a show of solidarity last week.

By Tuesday morning, the banner was gone.

“Thank you frontline workers,” the new banners read, along with an image of the caduceus, a symbol long associated with medical professionals, and the acronyms “FDNY,” referring to the New York City Fire Department, and “NYPD.”

A smaller, three-row section of the stadium honoring Black Lives Matter with the words “Moving Black lives to the front” remained.