Bisaccia has long coaching background with a ‘special’ personality 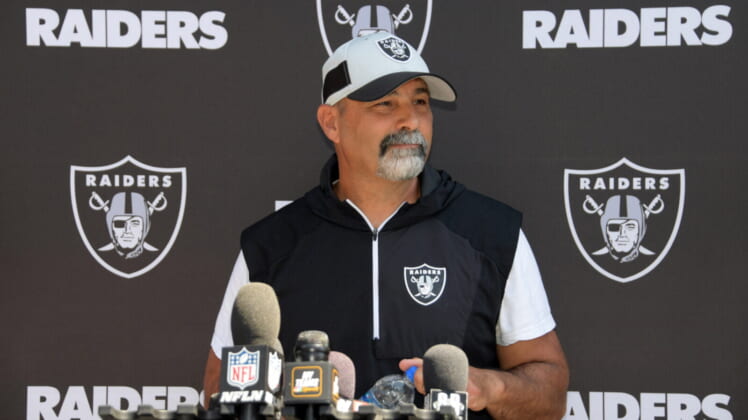 The Las Vegas Raiders newest interim head coach has been on the sidelines coaching for almost four decades. Rich Bisaccia, who is in his fourth season with the Raiders, has spent 20 years in the NFL, primarily as a special teams coordinator, in addition to the last three years as assistant head coach.

A native from Yonkers, New York, just 20 miles away from New York City, Bisaccia began his coaching career in 1983 at Wayne State College in Nebraska where he coached defensive backs and special teams.

Bisaccia said he could not predict that he would become an NFL head coach when he began coaching in Nebraska but wants to do achieve the most he can for the rest of the season.

“I did not think that then, not at Wayne State,” Bisaccia said. “In the summers, I was working at Waldbaum egg factory, so I wasn’t thinking about being a head coach. I was thinking about feeding my kid. Obviously, the longer we stay in this, regardless of the level, we all like to have this opportunity, to be in front of the men, to lead and that’s kind of what we all do.

“I’m going to do the best I can with the men that we’re working with to put a really good product on the field and to give our players a chance to be successful.”

After Bisaccia’s time at Wayne State, his coaching career continued at the University of South Carolina for six years before moving to Clemson from 1994-1998 as the running backs coach, special teams coordinator and recruiting coordinator. During the 1997 season, the Tigers set a school record with eight blocked kicks and between 1995 and 1997, Clemson recorded 15 blocked kicks, the most in a three-year span in school history.

Bisaccia would make one more collegiate coaching stop before his beginnings in the NFL at Mississippi, serving as the running backs coach and special teams coordinator, adding the role of assistant head coach for his last two seasons.

During Bisaccia’s first season in the NFL, he saw success during the 2002-03 season as the Tampa Bay Buccaneers won the Super Bowl and guided three of his special teams players to Pro Bowl honors.

After his time in Tampa Bay, Bisaccia moved coasts and went to San Diego, where spent the 2011 and 2012 season with the Chargers as special teams coordinator. He also received associate head coach duties in 2012. During his time in San Diego, Bisaccia helped improved the team’s punting, especially in net yards per punt with an 11-yard increase from 2010 to 2011.

Following San Diego and before coming to the Raiders, Bisaccia spent five seasons with the Dallas Cowboys and helped them win two NFC East titles in 2014 and 2016, while improving a kickoff return unit to a top five ranking in 2013 and 2017.

Bisaccia came to Raiders in 2018

During Bisaccia’s time with the Raiders, he has helped players earned multiple awards, including numerous special teams honors, such as kicker Daniel Carlson’s Week Two AFC Special Teams Player of the Week honors after the team’s 26-17 victory in Pittsburgh.

With all of his experience and the relationship he has with players in all three phases of the game – offense, defense and special teams – Raiders general manager Mike Mayock said he has the ability to coach this team.

Mayock added that this was not the first time he has supported Bisaccia to be a head coach.

“The irony is, I’ve endorsed him for a lot of head coaching jobs over the years, both in college and the NFL back when I had a different job,” Mayock said of Bisaccia. “He’s got as much respect in our locker room as any coach I’ve ever seen in my life. And the reason he does is, is he a great coach? Hell yeah. But he’s an even better man.

“And what I’ve always told people when I endorsed him, is that he the most natural leader on men that I have ever been around.”

Defensive end Maxx Crosby, who received AFC Defensive Player of the Week honors earlier this season, received the weekly special teams honors after the final week last season when Crosby blocked two kicks in a game, becoming just the second Raider since at least 2000 and first since 2011 to accomplish that feat.

Crosby said he has had a great bond with Bisaccia not only because of the football expertise he brings, but also because of personality he has.

“I’ve had a special relationship with him since I’ve gotten here,” Crosby said. “He’s one of the greatest men I know. He’s a great leader. Guys love being around him. The dude has been nothing but a positive influence in my life.”

Bisaccia’s first game as an NFL head coach is Oct. 17 against the Denver Broncos in Empower Field at Mile High. Kick off is at 1:25 p.m. and will be televised on CBS.