Bills strike early, improve to 7-0 at home vs. Packers 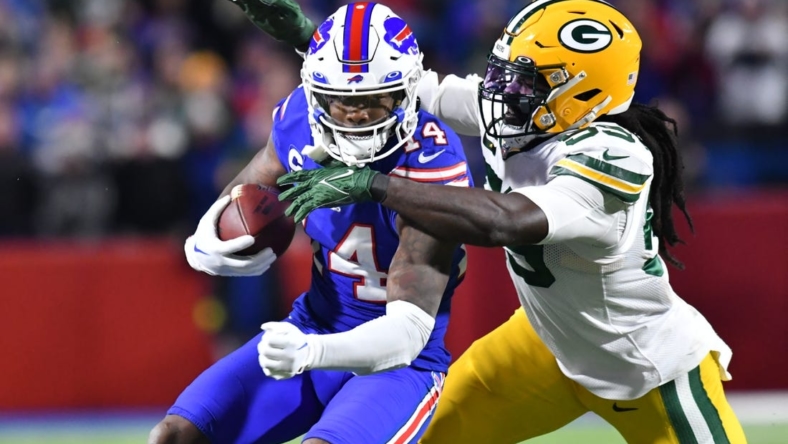 Josh Allen passed for 218 yards and two touchdowns, and the AFC-best Buffalo Bills increased their winning streak to four games with a 27-17 victory over the Green Bay Packers on Sunday night at Orchard Park, N.Y.

Stefon Diggs caught six passes for 108 yards and one touchdown for the Bills (6-1). Dawson Knox also had a scoring reception, Isaiah McKenzie tacked on a rushing touchdown and Tremaine Edmunds racked up a career-high 16 tackles.

Aaron Rodgers completed 19 of 30 passes for 203 yards with two touchdowns and one interception for the Packers (3-5), who lost their fourth consecutive game. Aaron Jones had a season-best 143 rushing yards and Romeo Doubs and Samori Toure had scoring receptions for Green Bay.

The Packers fell to 0-7 all-time when visiting the Bills.

Matt Milano recorded an interception for the Bills.

Buffalo struck first on Allen’s 1-yard scoring pass to Knox with 3:34 left in the first quarter.

The Bills increased their lead to 14-0 on the first play of the second quarter when Allen tossed a 26-yard touchdown pass to Diggs.

The Packers got on the board when Doubs made a tough 19-yard catch from Rodgers with 6:15 left in the first half.

Buffalo answered with 10 points in the final 1:54 for a 24-7 halftime lead. McKenzie scored on a 7-yard run with 1:54 remaining and Tyler Bass booted a 42-yard field goal as time expired.

The teams traded 38-yard field goals in the third quarter. Mason Crosby connected for the Packers with 10:20 remaining and Bass answered with 5:59 left.

After Allen’s second interception, the Packers drove 95 yards on eight plays with Rodgers and Toure teaming up on a 37-yard touchdown pass with 6:32 remaining in the contest.

Green Bay attempted to move within seven late in the game, but Crosby’s 55-yard field goal was wide left with 38 seconds left. Allen kneeled down once to run out the clock.