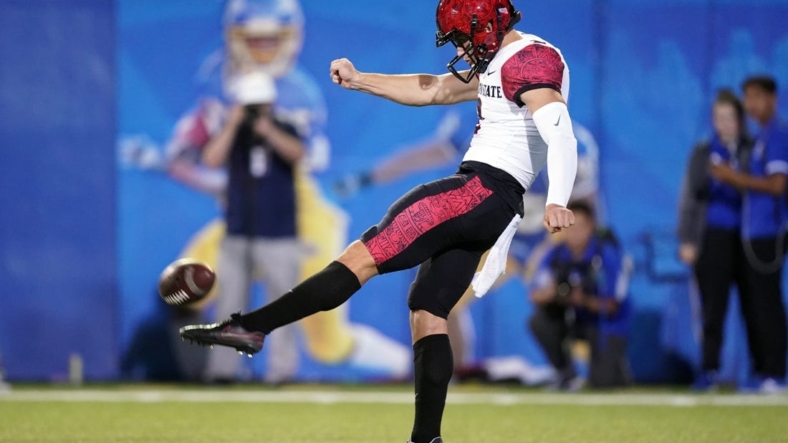 Araiza is accused of having sex with the girl outside a house and then bringing her into a room where she was repeatedly assaulted and raped. Also named in the suit are Zavier Leonard and Nowlin “Pa’a” Ewaliko.

The incident occurred in mid-October but San Diego State officials didn’t alert the campus community of the alleged rape and waited more than seven months to launch an investigation, according to the Los Angeles Times.

The Times cited records showing that an athlete expressed concern to school officials about the lack of an investigation and wondered if football coaches were “trying to sweep it under the rug because our football team is doing so well.”

At the time of the rape, Araiza was in the midst of an unprecedented season and had earned the name “Punt God” for his pattern of long booming kicks. He joined legendary runner Marshall Faulk (1992, 1993) as the lone unanimous All-Americans in program history, won the Ray Guy Award as the nation’s top punter and finished the season with a NCAA-record 51.19-yard average.

According to the Times, Kerry Armstrong, the attorney for Araiza, denied his client raped anybody.

“It’s a shakedown because he’s now with the Buffalo Bills,” Armstrong told the Times. “There is no doubt in my mind that Matt Araiza ever raped that girl.”

The Bills released a statement saying they are aware of the situation.

“We were recently made aware of a civil complaint involving Matt from October 2021,” the Bills said. “Due to the serious nature of the complaint, we conducted a thorough examination of this matter. As this is an ongoing civil case legal, we will have no other comment at this point.”

Araiza was a sixth-round pick of the Bills in the 2022 NFL Draft. During the proceedings, eyebrows were raised when two other punters were selected before him.

But Araiza, 22, performed well in training camp for Buffalo and recently beat out holdover Matt Haack for the gig.

The alleged victim, who is now 18, recently told the CBS affiliate in San Diego that she attended a party at the house late on the night of Oct. 16 and was approached by Araiza and was asked to perform oral sex.

She complied and said she was soon having sex with Araiza in the backyard.

She said Araiza guided her into a bedroom where there were at least three other men. She told CBS she was raped for “about an hour and a half” before the party was shut down.

The woman said she reported the rape to the San Diego Police Department on Oct. 18.

Leonard is an offensive lineman on the San Diego State football team. Ewaliko is no longer part of the program.