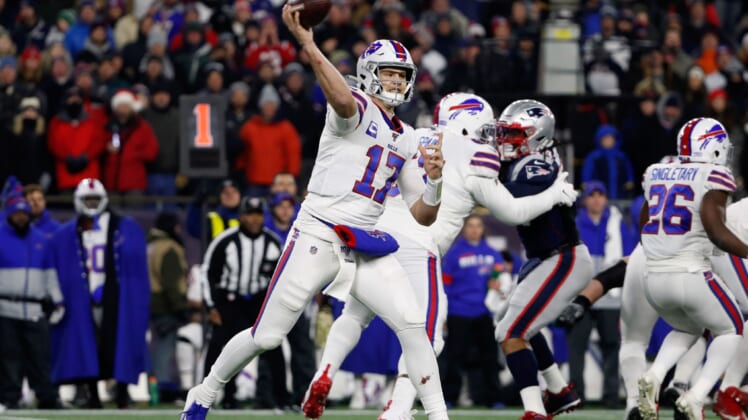 The New England Patriots have reigned over the NFL, and especially the AFC East for nearly two decades. After watching the Patriots win the division in each of the past 11 years, Josh Allen and the Buffalo Bills can overthrow the Patriots’ reign next season in the AFC East.

The skinny: The Bills came within two games of ending the Patriots’ stranglehold atop the AFC East in 2019. But it was clear Buffalo needed a few more pieces, along with one major change in New England, to contend next season.

There’s no bigger news in the NFL this offseason than Tom Brady leaving the Patriots for the Tampa Bay Buccaneers. The move shook up the entire NFL landscape for the 2020 season. And while the Buccaneers will obviously benefit from the move, the Bills are just as elated.

The quarterback who tormented them for years is gone. The Bills faced the Brady-led Patriots 35 times over two decades and he posted an astounding 32-3 record. He didn’t just beat Buffalo’s defense, Brady destroyed it with a 97.9 quarterback rating and a 70-25 TD-INT ratio.

Brady’s departure in and of itself is fantastic news for the Bills’ chances of winning the AFC East this season. But credit must also go to general manager Brandon Beane and head coach Sean McDermott. They have made a series of moves that will have this team ready to roll in 2020.

Bills’ thundering offense ready to rumble: Buffalo’s offense largely struggled during the 2019 season, but it always showed glimpses of potential. The offensive line struggled and Josh Allen battled inconsistency, but there was reason for hope coming into the offseason.

Despite ranking 24th in yards per play (5.2), 23rd in points (314) and 22nd in first downs (314), a core with Allen, running back Devin Singletary, receiver John Brown and tight end Dawson Knox is intriguing.

There’s plenty for the fan base to be excited about with those three ascending, young talents on their own. But Beane knew, for Josh Allen and this offense to really take a step forward, he needed to bring in a No. 1 receiver. While plenty of intriguing options were available in the 2020 NFL Draft, the Bills traded for a top-10 receiver instead.

Stefon Diggs is the answer: While Diggs might have caused some headaches for the Minnesota Vikings, he was also the team’s most-talented receiver. The 26-year-old is someone who always drew attention from No. 1 cornerbacks and he routinely found ways to beat them. While acquiring him cost the Bills’ a first-round pick, they landed a far better talent in Diggs.

Diggs is everything the Bills’ offense desired. He’ll be happy because he gets to be the No. 1 receiver in an offense and Buffalo is ecstatic to have another playmaker for Allen.

Even if Allen doesn’t make a massive third-year leap, he’s more than talented enough to take advantage of the weapons around him. He’s inconsistent and his accuracy can be frustrating, but there’s enough pure arm talent and progression from him to be an above-average starter.

Buffalo’s defense packs a punch: It’s the defense that deserves a majority of the credit for this team making the playoffs in 2019. Buffalo’s defense stomped all over teams nearly every week and there’s plenty of room for high expectations next year, too.

If that wasn’t enough talent for defensive guru Sean McDermott to work with, he also reunited with cornerback Josh Norman. While the veteran cornerback’s play declined in Washington, McDermott could help Norman rediscover some of his old form to be a solid No. 2 corner.

Pair all of that talent with defensive linemen Vernon Butler, Mario Addison and Quinton Jefferson, signings which will add depth to the defensive line, it all makes for a unit that will remain one of the NFL’s best defenses. If the offense improves, the Bills will be ready to roll in the AFC East.

The bottom line: While the Bills are rumbling up the in the league, the Patriots are on their way down. New England lost significant talent on both sides of the ball this offseason and they might be closer to a rebuild than contention.

Buffalo’s fans have been waiting a long time for it to be their year. They don’t have to worry about the Miami Dolphins or New York Jets, both are still rebuilding, and now the Patriots’ reign is coming to an end.

The Bills last won the AFC East crown in 1995. After a long wait, expect that streak to end next season with the Bills thundering towards a home playoff game and the division title.