There’s a reason the Buffalo Bills have not made the playoffs since 1999, when there were actually two Clintons in the White House. It’s not by accident. It’s not a coincidence. This organization and who has been tasked to head it for nearly the past two decades simply don’t get it.

The latest move to bench starting quarterback Tyrod Taylor in favor of rookie Nathan Peterman is a manifestation of these struggles.

Head Coach Sean McDermott has announced that Nathan Peterman will start this Sunday at QB. pic.twitter.com/PS6BenGTrR

By no means is Taylor a top-10 quarterback in the NFL. He completed 9-of-18 passes for 56 yards with an interception prior to being benched late in a 47-10 loss to the Saints last week. The former Virginia Tech standout is also averaging less than 190 passing yards per game.

These are the basic stats that suggest Taylor is a borderline starter in this league and not capable of being a focal point on a top-level offense.

But if we went with basic stats to draw a conclusion about quarterback play, Colin Kaepernick wouldn’t be unemployed right now. There’s a lot more to the process of analyzing how well a signal caller is performing.

For Taylor, it’s team success (otherwise known as quarterback wins). We know this is a flawed logic in its own right. Take Kaepernick’s on-field performance last season. He combined for 18 total touchdowns compared to just four interceptions in 11 starts for the 49ers. They posted a 1-10 record during that span, primarily due to a league-worst defense and some horrendous coaching. This lack of team-wide success had very little to do with Kaepernick.

Taylor’s situation is a tad different in that he has been one of the primary reasons Buffalo enters Week 11 with a winning record and in playoff positioning. 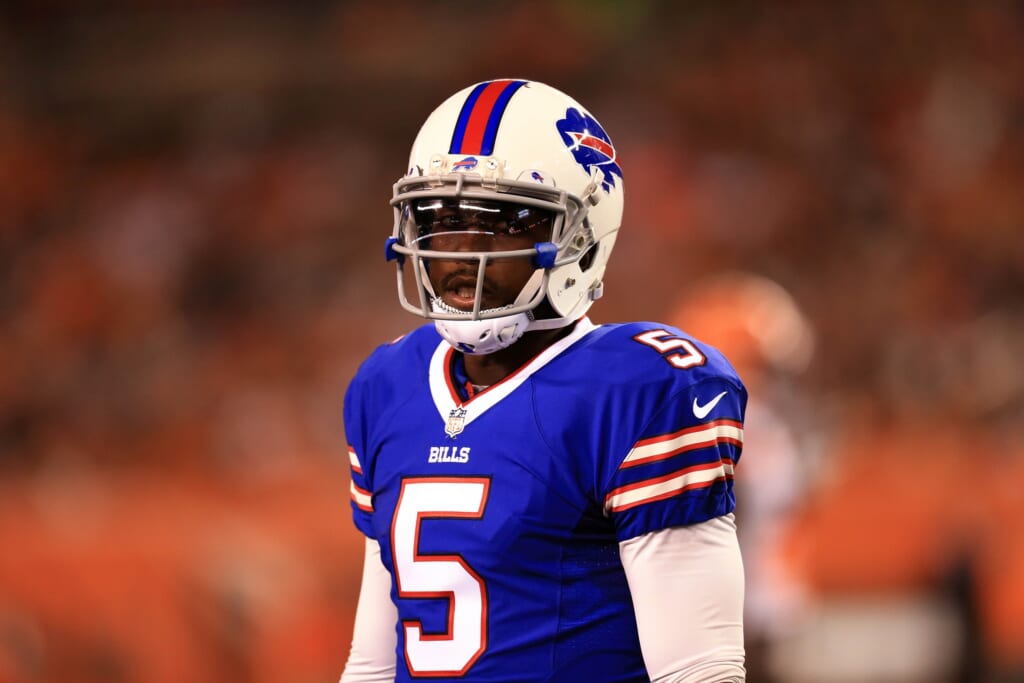 Consider this: Buffalo boasts a 26-26 record since Terry and Kim Pegula officially became the team’s owners back in October of 2014. Taylor has been the team’s starter for 19 of these wins and boasts a winning record in these starts.

It’s not a coincidence that the Bills went from laughingstock to a potential playoff team this season. Sure new head coach Sean McDermott and his change of culture has played a role here. But we can’t argue with the success Buffalo has had with Taylor under center.

Isn’t that the ultimate end game for teams in the professional sports world? Shouldn’t it be all about wins and losses, not how pretty a performance might have been?

This is something the Bills have failed miserably in recognizing since they earned their last playoff appearance back when Bruce Willis was freaking us out in Sixth Sense.

It’s not something new for the Bills. Since that last playoff appearance in 1999, 15 different quarterbacks have started a game for the team. Peterman will be No. 16 come Sunday against the Los Angeles Chargers.

The lack of willingness to commit to one single player at the most important position on the football field is what continues to ail this Bills team.

And it’s not going to get better suddenly because the team switched to a wide-eyed rookie signal caller.

For all of his flaws, Taylor has proven himself time and again as a starter-caliber quarterback in the NFL. He boasts the lowest career interception percentage of any player in NFL history with a minimum of 1,000 pass attempts.

No wonder the Bills have a winning record under Taylor. Outside of being the next Tom Brady or Brett Favre, one of the primary goals for a quarterback in today’s NFL is to limit mistakes. Statistically speaking, Taylor is better at that than any other signal caller in the NFL.

He’s also only one of four quarterbacks in the NFL this season with 10-plus touchdowns and three or fewer interceptions. The other three? Tom Brady, Aaron Rodgers and Alex Smith.

There’s certainly a level of ridiculous that comes with benching a starting quarterback for a team that’s currently in playoff positioning. Considering how well Taylor has performed, that’s magnified even further.

Again, this really isn’t anything new for the Bills. Remember, Rex Ryan was fired late last season in large part because he went to bat for Taylor. Once Ryan was let go, the Bills’ brass benched Taylor to conclude the season. This came after the quarterback had put up 23 total touchdowns compared to six interceptions.

For Taylor, there might be a little bit more to this.

“It’s always going to be twice as bad just because of who I am – an African-American quarterback,” Taylor said back in October, via Buffalo News. “Look across the league, man. We’re held to a certain standard. We almost have to be perfect.”

That’s certainly debatable. And maybe it’s a conversation worth having.

The facts, however, back up the claim that Buffalo had no legitimate reason to bench Taylor. He boasts a higher passer rating than half the quarterbacks currently starting in the NFL. His five wins are more than all but 11 quarterbacks around the league this season.

And for the Bills, the decision to bench Taylor likely means yet another season without a playoff appearance. Not a single objective person can conclude that Peterman, as a rookie, provides Buffalo with a better chance at success this season.

It’s simply the manifestation of this organization’s struggles for the past near two decades. And Bills fans should be outraged.