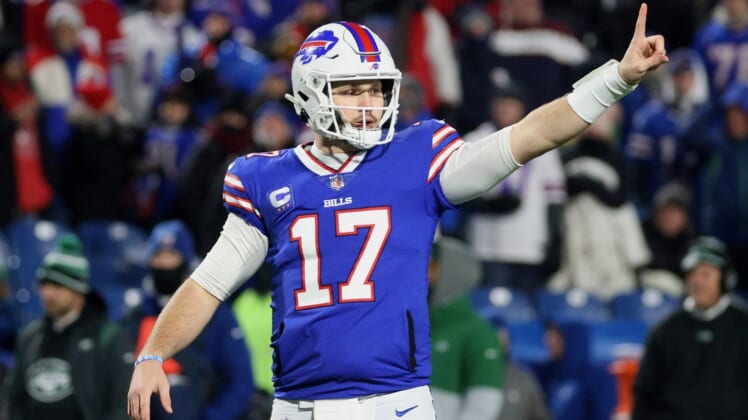 Bills quarterback Josh Allen motifs to the bench for one more play in the final seconds of the first half against the Jets.

A rare third meeting between Buffalo and New England will settle the score between the two AFC East rivals as the third-seeded Bills host the sixth-seeded Patriots in an AFC wild-card matchup on Saturday night in Orchard Park, N.Y.

After splitting their two regular season meetings, the Bills and Patriots are set to meet in the playoffs for the first time since Dec. 28, 1963. Back then, a Boston Patriots team overcame the Bills 26-8 at War Memorial Stadium in Buffalo in a divisional round matchup.

“Playing at home in the divisional round against our division rival — a team that’s been the standard for long-term success in the NFL for the last 25, 30 years — it’s going to be a great challenge,” Bills quarterback Josh Allen said. “It’s going to be another dogfight.”

New England has dominated the all-times series with Buffalo, posting a 77-46-1 record. In Buffalo, the Patriots are 38-23-1 and have gone 31-17 at the Bills’ current venue of Highmark Stadium.

However, the departure of Patriots star quarterback Tom Brady has opened a window for the Bills. Buffalo ended New England’s 11-year reign as AFC East champions one year ago as the Patriots finished 7-9 in their first season without Brady.

This year, a revamped New England team bounced back to make the playoffs for the 12th time in 13 seasons after finishing 10-7.

Yet even finding Brady’s successor in former Alabama champion quarterback Mac Jones and a nearly $200 million free agent spending spree wasn’t enough to keep the Bills from a second straight division crown after an 11-6 season.

Buffalo ended the regular season with four consecutive victories while New England limped to the finish line with three losses in its final four contests.

“Regardless of what level you’re playing on, you understand what’s at stake (in the playoffs),” Jones said. “We know the Bills are a really good team, they have a great defense — top in the league — and we understand that they have great players.”

On the heels of its first AFC East title since 1995 last season, Buffalo forged a deep playoff run with a narrow win over Indianapolis in the wild-card round and a statement victory against Baltimore in the divisional round before ultimately falling short at Kansas City in the AFC Championship Game.

This season, the Patriots and Bills each took different routes to winning on the others’ home field.

On Dec. 6, New England used an unorthodox and weather-altered game plan to win at Buffalo 14-10 in snowy and windy conditions. Jones attempted a franchise-record-low three passes and totaled 19 yards as Damien Harris’ 111 rushing yards paced the Patriots’ powerful run game to a victory.

In the rematch on Dec. 26 in Foxborough, Mass., Allen got his revenge after completing 30 of 47 passes for 314 yards and three touchdowns in Buffalo’s 33-21 triumph. With their receiving corps depleted, lesser known wideout Isaiah McKenzie had a breakout performance for the Bills with 11 catches for 125 yards and a touchdown.

Conditions for the completion of this season’s trilogy between the teams appear more likely to be similar to those of the first meeting in Buffalo. Forecasts are calling for bitter cold temperatures in the single digits at the time of kickoff.

Patriots linebacker Jamie Collins was added to the Wednesday injury report with an ankle injury. New England tackle Isaiah Wynn (hip/ankle) did not practice Wednesday after being listed as a limited participant on Tuesday.

Bills wideout Cole Beasley was listed as a limited participant at Wednesday’s practice due to what the team called veteran rest.