Bill Simmons is on the Clock

There are two things that I didn’t know about before I found the Bill Simmons Sports Guy column on ESPN:

* There is a Holy Cross institute of higher learning.

* A regular guy could interpret the thoughts a million of sports fans.

The latter, of course, inspired me to constantly monitor his writing because the Sports Guy, not Bill Simmons, was like me: A cynic, a conspiracy theorist, a homer, and unabashedly opinionated. The big difference is Bill Simmons, not the Sports Guy, is an incredible writer. When he is on point, there are very few online writers who inspire a Marv Albert “yes” throughout an article chock-full of points like Bill Simmons. And, even fewer who can close a column and give everlasting goose bumps like Bill Simmons.

The end, however, is near. 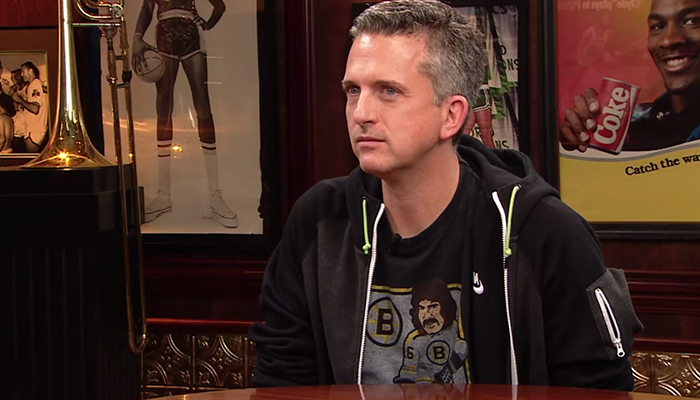 Courtesy of USA Today: Simmons fandom has played well in the past.

Let’s be clear: It may not be the real Bill Simmons on television, but that high-def twerp was NEVER the Sports Guy. The twerp on television never said anything and he never will. Sports Guy in print also supplanted his ego because the writing took precedence. On television, the ego took center stage and was so unbearable, so incredibly unlikable.

From his whiny, sometimes red faced temper tantrums, to his shouting to the basketball community to stop helping the Heat (more on that later), it was harder to justify watching ESPN when more enjoyable options were just a click away. I think of Stephen A. Smith when I look at Bill Simmons on television as being similar with one major difference: The belief that there is a lot of “act” in Smith’s braggadocio bravado. With Simmons on television, it cannot feel more real.

However, the times I have heard Simmons on the radio, that line gets blurry in a good way. In Miami Heat country, there is a lot of Bill Simmons hate with his Boston Celtic fandom. When Bill Simmons is on the radio in the Miami area, though, the twerp does not make an appearance. He is, as always, knowledgeable with a sense a humor.

If his ego allows, this clearly should be his next media foray should he continue to dissappoint those who crave his best gift as the Sports Guy who writes. As Dan Patrick intimated on his radio show recently, Yahoo and Google represent his best play for money and his multi-faceted talents as a writer, producer (30 for 30 series), and on-air talents.

Here is hoping that Bill Simmons (and Sports Guy) takes a little family time and rededicates himself to finding the best of both worlds between the pleasure he delivers as a writer and any additional media endeavor (radio) he chooses to pursue. Additionally, Bill, please find the time to dig a plot in the backyard and bury that television twerp persona.