Nebraska athletic director Bill Moos announced Friday that he is retiring at the end of the month.

“To understand just how special Nebraska is, you need to spend time here, meet our people, visit our cities and towns and sit in Memorial Stadium in a sea of red on a Saturday afternoon in the fall,” Moos, 70, said in a news release. “I step away completely content, knowing that our athletic program is reborn and rebuilt and that it has a solid, stable foundation.”

Moos was also involved with Nebraska’s $155 million football facility, which is under construction.

Nebraska chancellor Ronnie D. Green issued a statement thanking Moos for his service, particularly for his “steady and capable leadership” throughout the COVID-19 pandemic. 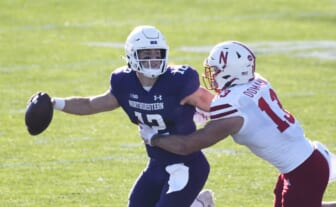 “He and his team were able to help mitigate those impacts and ensure that Husker Athletics came through this challenging year in good shape,” Green said. “The positive financial position of our Athletic Department is the envy of many across the nation.

“… I know that Husker Nation will join me in wishing Bill and Kendra all the very best in retirement. I hope they greatly enjoy the additional time with family this will bring.”

Green said a national search for a replacement will begin soon, with deputy athletic director for external relations Garrett Klassy Sr. taking on the role of interim AD during that process.

Moos’ contract was due to expire at the end of 2022. As recently as December, he said he intended to stay through at least the end of his contract.

“We’re going to move the dial here, and I don’t want to be looking at that success from afar,” he said then, per the Journal Star. “I have every intention of fulfilling the contract.”