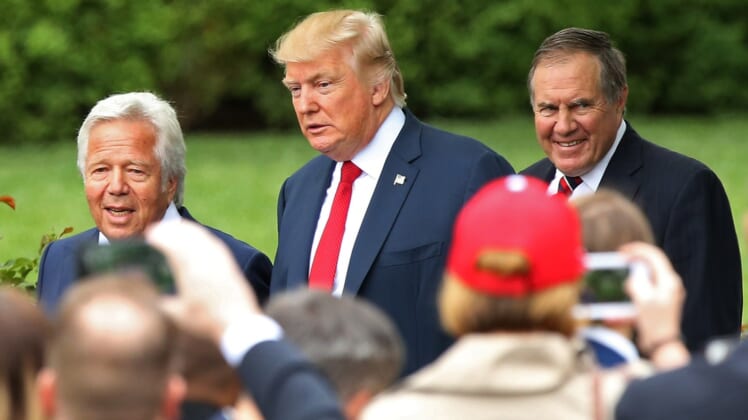 By now, it’s well known that New England Patriots head coach Bill Belichick shared a friendship with outgoing President Donald Trump prior to the latter taking office in January of 2017. It was covered ad nauseam in the lead up to the 2016 Presidential Election.

With President Trump now set to leave office in just over a week, the embattled figure thought it made sense to honor Bill Belichick with the Presidential Medal of Freedom, one of the greatest honors a civilian could get in the United States.

Fresh off the events of the past week, Belichick released a statement on Tuesday indicating that he would not accept the honor. He made clear why, too.

“Recently, I was offered the opportunity to receive the Presidential Medal of Freedom, which I was flattered by out of respect for what the honor represents and admiration for prior recipients. Subsequently, the tragic events of last week occurred and the decision has been made not to move forward with the award,” Belichick noted, via ESPN’s Adam Schefter. “Above all, I am an American citizen with great reverence for our nation’s values, freedom and democracy.

I know I also represent my family and the New England Patriots team. One of the most rewarding things in my professional career took place in 2020 when, through the great leadership within our team, conversations about social justice, equality and human rights moved to the forefront and became actions. Continuing those efforts while remaining true to the people, team and country I love outweigh the benefits of any individual award.”

Belichick is referencing the insurrection that took place, led by Donald Trump supporters, on Capitol Hill last week. Five people, including a Capitol Police Officer, died in the violent attacks. Since then, President Trump has come under fire by members of both major political parties for inciting the violence.

While this is a great individual award to receive, Belichick would not have benefited much from it. In turn, the six-time champion head coach likely would have received a ton of criticism from within an NFL world that has drawn a line between itself and President Trump after the police brutality we saw directed at the minority population in the United States ahead of the 2020 season.

Belichick is fully aware of his place in history, and doesn’t want to do anything to place that into question. Meeting with the president one week before a new administration is set to take over and with Trump facing a second impeachment would not have been good optics, regardless of where he stands politically.

As for the Patriots, they are coming off their first losing season since all the way back in 1995. There’s a lot of work that has to be done behind the scenes without these distractions. An ultimate professional, Bill Belichick also understands that full well.

More than anything, the all-time great coach needs to find a quarterback to lead the team after Tom Brady’s departure in free agency ahead of the 2020 season. Having to answer questions about a meeting with President Trump during the latter stages of his presidency wouldn’t have helped matters much.