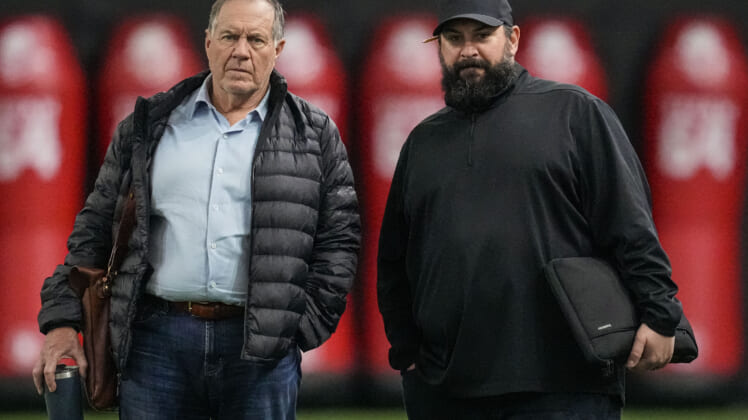 It should be obvious by now, New England Patriots head coach Bill Belichick couldn’t care less about outside opinion.

The man who made the cutoff sleeve hoodie a trend lost his top offensive mind when his offensive coordinator and play-caller Josh McDaniels landed the head coaching gig with the Las Vegas Raiders this offseason.

This has caused plenty of speculation among the Patriots’ following as to who might take his place. With McDaniels moving on after 13 years as their OC, someone else on the staff will now be tasked with calling plays in to Mac Jones in his second NFL season.

One of the possible candidates is former New York Giants head coach Joe Judge, who is reportedly working with the quarterbacks as they progress through the offseason, but both coach Judge and coach Belichick won’t reveal who actually will be calling plays on game day.

In fact, Belichick doesn’t seem particularly pleased with having to answer questions about something that doesn’t have to be revealed until September 11, when the Pats take on the Miami Dolphins in the first regular season game of the year.

Speaking with the media with OTAs set to start on May 23, naturally, Bill Belichick faced questions about who his offensive play-caller would be, and in typical fashion, the coach said a lot, without saying anything.

“There’s a lot of jobs that we have to do and we’re all working on those things,” Belichick said in his press conference. “Now, it’s May. They’ll change in June. They’ll change in August. They’ll change in September. So, we’ll evolve and do the things timely that we need to do. Now, if you’re asking about game plans, we’re months away from that — months.”

It’s clear Belichick doesn’t appreciate reporters trying to pry for information he isn’t looking to reveal. Of course there’s a natural curiosity about who will handle play-calling duties. It’s a big season for Mac Jones as he takes a second step in his career, observers simply want to know who will be tasked with helping the Pats flow on gameday.