Biggest winners and losers from UFC 272

UFC 272 on Saturday night emanated from the T-Mobile Arena in Las Vegas. The pay-per-view event was headlined by a hate-filled grudge match pitting top-10 welterweights Jorge Masvidal against Colby Covington.

In the end “Chaos” reigned supreme in this battle of frenemies. Outworking and out grappling his former teammate and roommate with a dominant five-round unanimous decision win. He left Nevada with serious bragging rights for years to come.

The card also featured a battle of top-five women’s strawweights in Marina Rodriguez and Xiaonan Yan. the 170-pound debut of middleweight veteran Kevin Holland, and a clash of ranked featherweights in Edson Barboza versus Bryce Mitchell.

Let’s take a look at the key winners and losers from the UFC’s latest numbered event in Las Vegas.

Covington walked into the UFC 272 headliner very confident and a big favorite with oddsmakers. It seems they all knew what was coming as the Oregon native dominated Masvidal for the majority of their five-round battle. There is no other way to slice it. “Gamebred” had no answer for Covington’s wrestling and cardio supremacy. If there was any doubt about how good the one-time interim champion is, he proved it once again versus an elite welterweight. After champion Kamaru Usman, Covington is the best 170-pound fighter alive.

This one has to sting for “Gamebred.” If there was one man in his long distinguished career he would never want to lose to, it’s Covington. And he lost to him, badly. As many expected he had no answer for his former friend’s wrestling and was shut down and kept quiet for most of the fight’s 25 minutes. He has lost three straight and will never sniff a welterweight title opportunity ever again.

Rafael dos Anjos’ win at the UFC 272 fight card was a very important moment for him. He has had a difficult return to lightweight with four separate bookings being canceled since he beat Paul Felder in November 2020. He took this matchup with a ranked fight in Renato Moicano on less than a week’s notice and dominated a talented competitor. 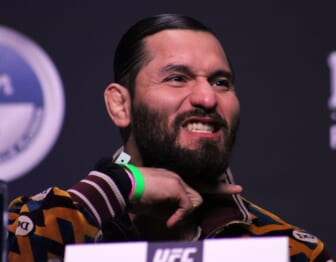 The former lightweight champion is now 2-0 in his return to his old stomping grounds and he remains a relevant fighter at the top of the division at 37-years-old. He is in line for another big fight with a top-five caliber fighter next.

Edson Barboza was completely shut out by Bryce Mitchell on the UFC 272 card. The Louisiana native landed close to 200 ground strikes over close to 11 minutes of ground control. The Brazilian had no answers for his opponent on the mat. After back-to-back wins at featherweight, “Junior” is now 2-3 in the division. It seems that changing divisions has not made much of a difference in his career. It has solidified his place as an always good, but never great fighter in the UFC.

Kevin Holland had a successful debut at welterweight, but it was not without some dangers. Surprisingly, Holland did not get a wild and crazy Alex “Cowboy” Oliveira. He instead battled a technical fighter with something to prove. In the first round, he stunned and outwrestled “Trailerblazer,” and likely won the round. But eventually, the high-level talent of Holland showed out in the second, and he scored a destructive TKO victory early in the round. While far from perfect, Holland’s first foray at 170-pounds was as exciting as his bouts at middleweight.

Easy work. That’s what it was for Serghei Spivac against NFL veteran Greg Hardy in his UFC 272 fight. The Moldovan is a top-15 level fighter who has fought and beaten some elite talent. Hardy isn’t and it showed in a major way. After a solid start to his career where he seemed to have some potential, the former Pro-Bowler has now lost three straight, all by knockout. The question now is, considering the dislike MMA fans have for him because of his sordid past, does the UFC cut bate and end the Hardy in the UFC project?

Tim Elliot walked into UFC 272 coming off a loss and being a +190 betting underdog to talented prospect Tagir Ulanbekov. The Russian fighter had won five straight — two inside the Octagon. So the bout looked to be a litmus test to see how good Ulanbekov can truly be. Unfortunately for him, he failed the wild and unpredictable exam offered up by the 30-fight veteran.

Elliot used the relentless and erratic style he is known for and got back in the win column on Saturday. This W was his third victory in his last four. Elliot has totally righted his career ship after losing three straight fights between 2019 and 2020.

Kennedy Nzechukwu will look back on his March 5 with a whole bunch of regret. Not just because a third eye poke led to receiving a point deduction in the third round, but because he simply got outworked by Nicolae Negumereanu. He was clearly the more talented fighter, but opponent Negumereanu used toughness and will to supersede the skill disadvantage and make it a closer fight than it should have been. Instead of earning a bounce-back win, Nzechukwu leaves Vegas with a split-decision loss and a second straight defeat in the Octagon.

UFC lightweight goat Khabib Nurmagomedov’s cousin Umar Nurmagomedov kept his record unblemished last night with an impressive win over Brian Kelleher. He was a massive -1000 betting favorite before the fight and proved oddsmakers right by dominating a darn good veteran bantamweight in Kelleher. The Russian only needed a little over three minutes to earn his fourteenth straight win and seventh submission victory. 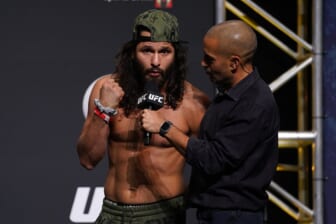