Biggest Injuries From Week 1 of the NFL Season

Injuries became a major part of what happened during the first week of the 2014 NFL regular season. From Pro Bowl performers and team leaders to heralded youngsters, there were a lot of injuries that have already taken place this season which will impact the success of specific teams moving forward.

It’s a sobering part of the sport we all love so much.

Here are status updates for some of the biggest injuries that took place during Week 1 of the season and what they might mean moving forward. Keep in mind that teams likely won’t be releasing a ton of information until later in the week. But we already have somewhat of a good idea where some of these players stand for Week 2 and beyond.

Shaun Hill (strained quad) believed to be a longshot to play Week 2, according to @RapSheet: http://t.co/UtWhbZcUhR

Making his first start as a member of the Rams on Sunday, this career backup suffered a groin injury and didn’t return to action. Reports now indicate that Hill is unlikely to go Week 2 against the Tampa Bay Buccaneers. This means that Austin Davis, who finished up for Hill last week, will likely get the start for the struggling Rams.

With Ben Tate's status up in the air, @YahooNoise says the other #Browns RBs are key @YahooFantasy pickups
WATCH: http://t.co/HWbP0qgO0O

Cleveland has yet to provide an update on Tate’s status after he suffered a knee injury in the first half of his debut with the team. Once Tate went out, the likes of rookies Terrance West and Isaiah Crowell combined to put up 132 yards and two scores on 21 rush attempts. Even if Tate is able to go Week 2 against the New Orleans Saints, I wouldn’t bank on him being able to do much. There will be an update on his status as the week progresses.

Lacy suffered a concussion in Green Bay’s blowout loss to the Seattle Seahawks on Thursday. The good news here is that he has a couple extra days to overcome concussion-like symptoms in order to play against the New York Jets on Sunday. Packers head coach Mike McCarthy indicated that Lacy passed the first step of the concussion protocal, which is yet another good sign. If Lacy is unable to go on Sunday, veteran James Starks will likely get the start.

Tyler Eifert is a candidate now for the Bengals' IR-designated for return designation. That would sideline him at least 8 weeks.

The second-year tight end suffered an injury so gruesome that we will not show it here. The former first-round pick suffered a dislocated elbow Week 1 against the Baltimore Ravens and could potentially be placed on injured reserve with a designation to return. He was targeted three times on just eight snaps prior to the injury, which is an indication that the Bengals expected to utilize the big-bodied tight end more than they did last year. The Bengals remain hopeful that Eifert will be out of action for just a few weeks. More information on his status should come later in the week.

Robert Griffin has lost one of his most-talented pass catchers for an extended period of time. Reed is expected to miss “significant action” with a hamstring injury. The second-year tight end missed seven games due to injury as a rookie, but was still able to put up 45 receptions for 499 yards. This is a major blow for RGIII and Co. 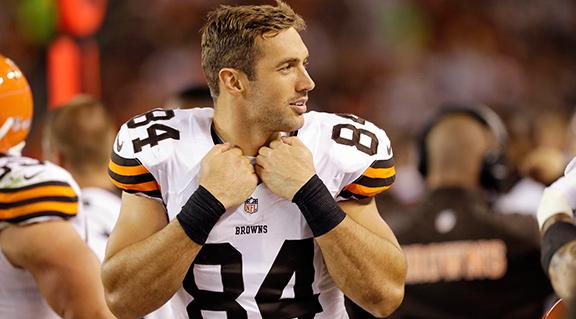 Camreron suffered a shoulder injury in Cleveland’s Week 1 loss to the Pittsburgh Steelers. The talented young tight end then indicated following the game that it was an aggravation of an injury he suffered during training camp back in August. In a sign that the Browns are concerned about Cameron’s injury, they worked out veteran free agent Kellen Davis on Tuesday. That might tell us what we need to know about Cameron’s long-term status. In any event, don’t expect him to suit up Week 2 against the New Orleans Saints.

The rookie left tackle, who is replacing an injured Sam Baker protecting Matt Ryan’s blindside, injured his ankle in the Falcons Week 1 victory over the New Orleans Saints. He received an MRI following the game and there doesn’t appear to be any significant injury. Atlanta dodged a major bullet here.

#Eagles G/T Allen Barbre (high ankle) is expected to have surgery which could end his season, a league source said.

This is a major blow to an Eagles offensive line that has been among the best in the NFL since the start of last season. According to multiple reports, Barbre, who is replacing a suspended Lane Johnson, will likely be out for the remainder of the season and will be required to undergo ankle surgery. While Johnson is slated to return after four games, the Eagles are going to be in trouble at right tackle until then. After all, no team plans to have to reach this far into its depth chart after just one week of the regular season.

On the other hand, I'm hearing 6 to 8 week recovery time for @EvanMathis69, which would seem to make him ideal candidate for limited IR…

In a bigger blow to the Eagles offensive line, it appears that Mathis will be missing some substantial time with a MCL sprain. As one of the best guards in the NFL (if not the best), this is a major loss for Philadelphia’s run game and LeSean McCoy. Mathis was placed on short-term injured reserve, which means he can return Week 10. Dennis Kelly or Matt Tobin will likely replace Mathis in the starting lineup.

Mankins didn’t last too long in his regular season debut with the Buccaneers. The Pro Bowl guard suffered a knee injury against the Carolina Panthers and didn’t return to action. Head coach Lovie Smith indicated that the team will have an injury report ready on Wednesday. The injury isn’t expected to be too serious. Tampa Bay acquired Mankins from the New England Patriots in exchange for Tim Wright and a fourth-round pick during the preseason.

The veteran defensive end suffered a torn achilles against the Tennessee Titans and will miss the remainder of the season. It was yet another blow for a Chiefs team that was blown out at home against a team many thought they could handle in Week 1. With DeVito out of action, the Chiefs acted quickly by signing former Denver Broncos lineman Kevin Vickerson. As of right now, it would appear that Vance Walker is the best option to replace the veteran in the lineup. 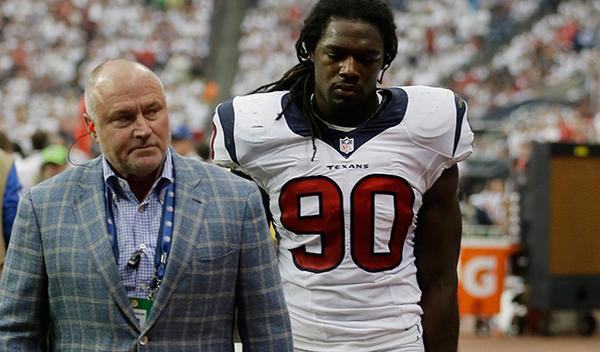 Mere minutes after making his NFL debut, the 2014 No. 1 overall pick found himself being rushed into the locker room after suffering what is now known to be a serious knee injury. Clowney suffered a torn meniscus in the game and just recently had arthroscopic surgery to fix the issue. He’s slated to be out 4-6 weeks. This most definitely isn’t how the elite pass rusher envisioned his NFL career to begin.

Chris Long had a brace on his left ankle postgame, sounded uncertain about extent of injury.

Long suffered an ankle injury against the Minnesota Vikings on Sunday and doesn’t seem too confident that he will be able to suit up this week against the Tampa Bay Buccaneers. With Long likely out of action, veteran Will Hayes will be called on to start opposite Robert Quinn along the Rams defensive line.

Washington will be without starting NT Barry Cofield vs. the #Jaguars http://t.co/b6a3ys8ym7

While Cofield won’t fill up the state line, he’s an important part of the Redskins defense. And losing him to short-term injured reserved after one game is going to hurt the struggling unit. He has started 80 consecutive games for the team.

For those asking, Vontaze Burfict is in the concussion protocol. Which, as ML said Fri., is “nebulous” process. Sunday status in the air.

The Pro Bowler suffered a concussion in Cincinnati’s Week 1 victory over the Baltimore Ravens. He’s going to have pass a battery of concussion tests in order to play this upcoming week against the Atlanta Falcons. If Burfict is unable to go, second-year player Sean Porter would likely get the start in his stead.

In one of the only negative aspects of Tennessee’s Week 1 victory over the Kansas City Chiefs, it will be without this young linebacker for the remainder of the season. Brown suffered a torn pec muscle and will be placed on season-ending injured reserve. He has started 28 games since being selected by the Titans in the second round of the 2012 NFL draft. With Brown out of action, Zaviar Gooden will likely start for the remainder of the season at inside linebacker.

I really wanna Thank everyone for all the best wishes of speedy recoveries and prayers due to my sporadic injury. God has a PLAN. Promise!

This injury hurts the struggling football team a great deal. Johnson, a Pro Bowl performer in each of the last three seasons, suffered a season-ending achilles injury Sunday against the Tennessee Titans. As the emotional leader of the defense and one of the most-talented linebackers in the NFL, Johnson’s loss will be felt up and down the roster. Unproven youngster James-Michael Johnson will likely see a bulk of the action in his stead.

X-rays on Tramaine Brock's toe showed no fracture; still turf toe potentially could keep him out of action. More tests to come this week.

Brock suffered a toe injury in San Francisco’s blowout win over the Dallas Cowboys on Sunday and is currently questionable to go this week against the Chicago Bears. Defensive coordinator Vic Fangio expressed optimism on Tuesday that Brock will not miss any action, but these types of injuries can impact players over the duration of an entire season. San Francisco could very well make the decision to sit Brock in order to guarantee that he is ready to go for the long haul.

The second of two 49ers starting cornerbacks to leave Sunday’s game against the Dallas Cowboys, Culliver’s status is up in the air for this upcoming week. He suffered a concussion and will have to go through the league’s protocal between now and Friday in order to be cleared to play by Sunday night against Chicago. While veteran Perrish Cox and rookie Dontae Johnson played well with San Francisco’s two starters out of action against Dallas, this has to be concerning considering the fact that the team is slated to go up against Brandon Marshall and Alshon Jeffery on Sunday Night Football

CB Jeremy Lane has been placed on the injured reserve/designated to return list and CB Josh Thomas has been signed in his place.

Seattle’s depth at cornerback will be tested over the course of the next few months after Lane suffered a groin injury against Green Bay that will force him out of action for the next 10 weeks or so. The valuable cornerback was placed on injured reserved with a designation to return. With Tharold Simon unlikely to be ready for Week 2 against the San Diego Chargers, the Seahawks will be very thin at cornerback against Philip Rivers and Co.