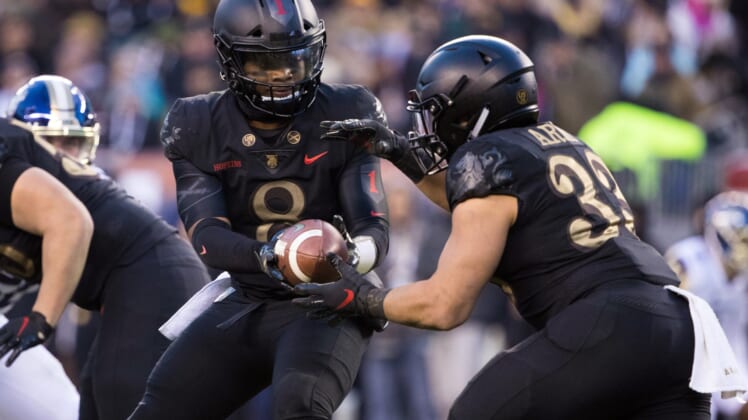 The 119th Army-Navy Game took place on Saturday in Philadelphia with President Donald Trump in attendance, and surprisingly this was a close game.

Even before the contest began, the special day gave fans and the servicemen and servicewomen at the game plenty to cheer about.

The pageantry. The flyover.
The Army-Navy Game is something special. pic.twitter.com/PuMIko7iKa

President Trump got things started by tossing the coin at the tail end of the opening ceremony, not surprisingly starting plenty of conversations in the process.

Now, on to the highlights!

Once the action commenced, it looked like Army might run away with it after scoring a touchdown right off the bat.

ONE DRIVE. ONE TOUCHDOWN.

Not long after that, the Knights showed they can play some defense, too, with a sweet tip-drill interception.

In the second half, Army threatening to score its second touchdown of the game, it was Navy’s turn to show it could play some defense.

Mike Reynolds then made the defensive play of the game late (to this point) in the third quarter.

– Stop it with one hand
– Catch it
– Tip-toe the sidelines

Mike Reynolds did a bit of everything on this INT. pic.twitter.com/jZHshwAbje

And in the fourth quarter, Army’s defense once again rose up and stunned Navy’s offense, right as it was about to finally get on the board.

Army picked a GREAT time to force a fumble. pic.twitter.com/jVDgBVbnwk

Just a few minutes later, the biggest hit of the game took place, and it was a timely one at that, forcing Army into a punt.

Sean Williams had no intention of letting Army get a first down on this play. pic.twitter.com/AfxyZTcFsW

Navy’s offense finally got on the board on the next possession, thanks in large part to a dynamic run up the middle.

Oh man it's gonna be a sack…OH MAN WHAT A RUN. pic.twitter.com/M9A1KrB0z0

Fittingly, it was a defensive play that sealed the win for the Knights.

In the game’s final minutes, the Knights padded their lead and put the game out of reach for good with a one-yard touchdown run by Kelvin Hopkins Jr. There was much celebrating.

Navy did manage to get down the field close enough to kick a field goal and cut the lead to a seven points, 17-10. But the onside kick afterward was not successful, and that’s how the game ended.

Ultimately, the Knights, who came into the contest with a 9-2 record, were just too strong for Navy, which dropped to 3-10 on the season.