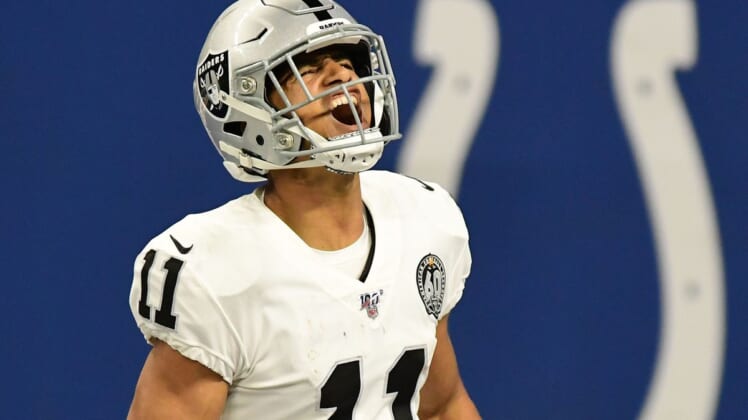 After two disappointing losses in consecutive weeks, the Raiders go on the road and win convincingly thanks to efficient offense and a tough defensive showing.

This column first appeared on the CBS Sports Radio 1140 website.

After a week of questioning when the Raiders may get their offense on track, coach Jon Gruden and his starting quarterback Derek Carr started fast jetting to a 14-0 lead in the first quarter before beating the Colts 35-21.

Carr and the offense had a good day, starting fast, and then tailing off. Despite that, they did what they needed to do to win the game.

Carr, coming off average performances the past two weeks, looked more like the player fans cheered for in the Raiders Week 1 win over Denver. Carr led his team to touchdowns on three of the team’s first four possessions finishing the day 21-of-31 for 198 yards and two touchdowns.

And I just like to say once again, I’m really proud of our team. We came to play and we finished and beat a good team. – Jon Gruden

“We said on the sideline, we gotta go get points,” Carr said after the game. “But (we) had a lot of long drives, a lot of sustained drives, and that happens when everyone’s just doing their assignment. Everyone’s on the same page.”

Carr and the offense were given a big boost with another dominant performance by rookie running back Josh Jacobs. Jacobs racked up over 100 yards from scrimmage including 79 rushing on 17 carries and another 29 yards on two catches.

It can’t be underscored how much Jacobs means to this Raiders offense. Last week in the team’s loss to Minnesota, Jacobs was coming off an illness that limited his availability and effectiveness. In Gruden’s offense, the ability of a running back to set the pace is key and Jacobs is this team’s greatest weapon – even in the passing game.

On a day where Carr and the offense showed marked improvement over the past two weeks, it was the Raiders defense – thin from injury in the linebacking corps and defensive backfield – that made a strong statement. Rookie defensive end Maxx Crosby and veteran cornerback/safety Lamarcus Joyner both shined.

Crosby, the Raiders 2019 fourth-round draft pick out of Eastern Michigan, batted down two Jacoby Brissett passes and consistently rushed the Colts quarterback. Despite squaring off against the league’s best pass-protection unit, Crosby was disruptive the entire day. The Raiders needed a good showing on the defensive front to have a chance and Crosby and second-year tackle PJ Hall both answered the call.

While first-round draft choice Clelin Ferrell was mostly quiet, the combined work of the defensive front helped the Raiders keep the Colts mostly in check throughout the game.

“I don’t know. I mean, you know, we’re a long way away,” Gruden said. “We’re building our team. We got a lot of young guys. It’s just a bunch of guys that are, you know, playing hard.”

And that’s the key. As we said on our Silver and Black Today show (Sunday’s 8-10 AM on CBS Sports Radio 1140), this team might not be playoff-bound in 2019, but it’s important to see flashes of great improvement – even in losses. To win at Indianapolis was big for this team’s confidence. Especially ahead of a big showdown with their former teammate Khalil Mack and the Chicago Bears.

The game, for all intents and purposes, ended on a pick-six for safety Erik Harris who ran back an errant Brissett pass 30-yards to give the Raiders a late 31-17 lead. Harris played an inspired game along with Joyner and Oakland’s coverage on the day was top-notch. It’s worth noting the Colts were without their top-two wide receivers but seeing the coverage and playmaking ability of the group improve was key for this team.

This after the Raiders lost one of their best in hard-hitting linebacker Vontaze Burfict. Burfict, long since disliked and scrutinized for his over-aggressive and physical play as a member of the Cincinnati Bengals, was ejected early in the game.

Burfict was a risky signing for plays like today where he clearly hit a defenseless player leading with his head. It was a poor choice by the talented player and had the capability of severely hurting the Raiders chances on Sunday.

Although it was clearly – and correctly – a 15-yard personal foul penalty, could Burfict’s prior indiscretions have factored into his ejection?

“You know, I just I know New York City pulled the ejection, so you’d have to ask New York, whoever is in the room that made that decision,” Gruden said of Burfict’s early exit. “I think it was penalized multiple times by multiple referees today. Nobody on the field in our stadium made the call to eject him. That came from New York City. So, what can I do? I don’t have a cell phone on the field.”

Luckily, his teammates picked him up. It was an important step forward for a defense that will be challenged – and fall down – the remainder of the Raider brutal schedule.

This by no means was a perfect win but Gruden said it was the win he was most proud of in his career as Raiders coach.

“And I just like to say once again, I’m really proud of our of our team,” Gruden said. “We came to play and we finished and beat a good team.”

Gruden and the Raiders should feel good about the progress. But this is the NFL and the big, bad Bears await them in London.