Big second half sends No. 12 Dundalk High School past Parkville; Fiorenza and Stokes account for 4 TDs 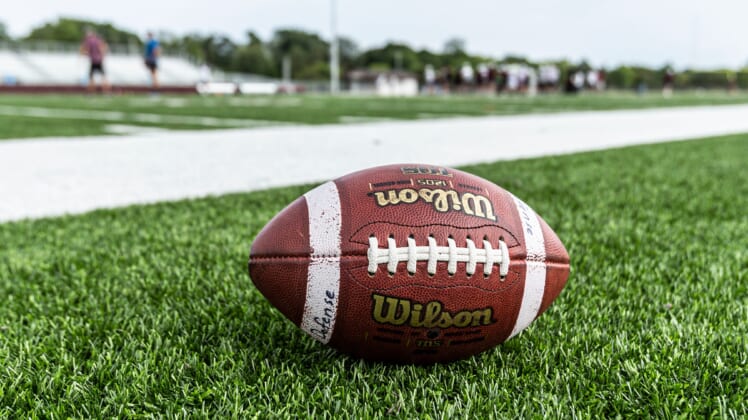 After a relatively close first half, 12th-ranked Dundalk High School, behind an offensive clinic by quarterback Calvin Stokes and running back Jordan Fiorenza, pulled away in the second half for a 37-6 victory over Parkville in a Baltimore County football contest Saturday afternoon at Yates Field.

Stokes, a senior dual-threat signal-caller, finished nine-for-15 passing for 188 yards and two touchdowns while rushing for another touchdown on a team-high eight rushes for 96 yards. Fiorenza ran for 49 yards and a touchdown on seven carries and had three receptions for a game-high 82 yards.

Parkville’s only touchdown came when defensive back Parker Nnodim scored off a 24-yard interception return at the end of the first half. Dundalk kept the Knights off the scoreboard over the final 24 minutes, moving to 2-0 for the first time since 2018.

“I thought the first half was sloppy, we were sleep, Saturday game, little change of pace for our guys. I thought when we took a deep breath at halftime and we locked in, I think we were ready to go,” Dundalk coach Matt Banta said.

Banta said his team didn’t make any schematic changes but it was simply a matter of “an attitude change” and playing more as a team.

“Calvin Stokes, the quarterback, and Jordan Fiorenza, the running back – when those guys are clicking, when the O-line is doing the right things, those guys are hard to stop. We saw that more in the second half than we did in the first, but I’m very proud of both of those guys,” Banta added.

Linebacker Abdullah Sargeant returned an interception six yards in the first quarter, giving the Owls the early advantage. Stokes linked up with Marcus Nicholson for a 20-yard touchdown in the second to give Dundalk a 14-0 advantage.

Stokes threw a pair of interceptions Saturday, but he seemingly found gaps in Parkville’s defensive front and secondary, especially in the third and fourth quarters. He tossed a 20-yard touchdown pass to Nyjeer Tirado midway in the third and scored on an eight-yard quarterback keeper early in the fourth.

Fiorenza added a touchdown run from 27 yards to conclude a dominant second-half performance for Dundalk.

“The game plan was to stay focused and stay locked in, and just keep on pushing to get where we need to be,” Stokes said. “This win, it’s a good win to have under our belt but we still got a lot of work to do. We still got a lot of mistakes to fix, and going into Perry Hall this week we’re going to fix those mistakes and hopefully come out better next week.”

The Owls’ unrelenting defense, limited Parkville (1-1) to under 100 yards Saturday. The Knights, who reached the Class 4A state quarterfinals in 2019 (11-1), is retooling after graduating most of its veteran nucleus from this past spring season.

“We’re a work in progress, and when you play good football teams and you make mistakes as well, you’re going to struggle. And today we struggled mightily.”