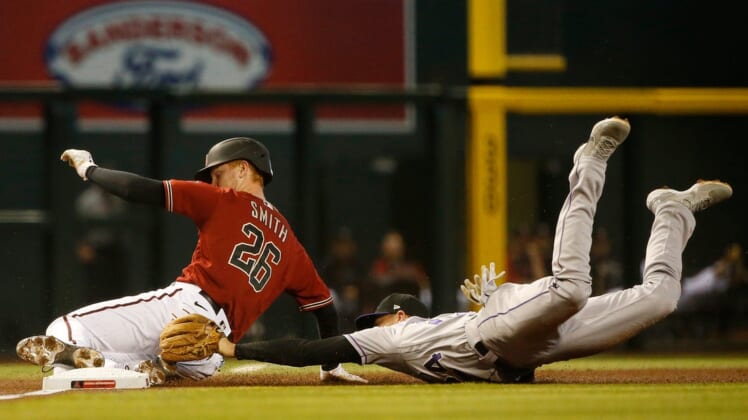 May 2, 2021; Phoenix, Arizona, USA; Rockies’ Ryan McMahon (24) dives and tags out Diamondbacks’ Pavin Smith (26) as he slides into third during the first inning at Chase Field. Patrick Breen-Arizona RepublicMlb Rockies Vs Diamondbacks

Pavin Smith homered, Daulton Varsho and David Peralta had two hits each, and the Arizona Diamondbacks beat the Colorado Rockies 8-4 in Phoenix on Sunday.

Stephen Vogt had a go-ahead triple in the eighth and starter Merrill Kelly allowed two runs on seven hits in 5 2/3 innings for Arizona.

Trevor Story homered, Raimel Tapia had three hits and Elias Diaz and Matt Adams had two each for the Rockies. Story left the game in eighth inning after being hit by pitch on his right index finger.

The Diamondbacks won the game with their four-run rally in the bottom of the eighth against Daniel Bard (1-2). Josh VanMeter walked, Peralta singled with one out and Vogt tripled to drive in both runs and give Arizona a 6-4 lead.

Josh Rojas and Varsho followed with consecutive doubles to make it a four-run game and chase Bard.

Arizona had taken the lead in the second inning when Varsho scored from first on a two-out double by Nick Heath.

The Rockies came right back in the top of the third. Chi Chi Gonzalez led off with a single, and two outs later Story drove a ball deep into the seats in left to put Colorado ahead 2-1. It was his fourth home run of the season and his second in as many nights.

It stayed that way until the fifth inning. Varsho led off with a single to center and after Gonzalez retired the next two batters, Smith hammered a home run to right field, his third of the season.

VanMeter then walked and scored on Eduardo Escobar’s double to make it 4-2. That was all for Gonzalez, who allowed four runs on five hits in 4 2/3 innings.

The Rockies rallied to tie it in the top of the eighth inning.

Diaz led off with a double to the corner in left field, and after Chris Devenski (1-0) got the next two batters, Tapia drove in Diaz with a single. Tapia stole second and scored on Garrett Hampson’s single to make it 4-4.