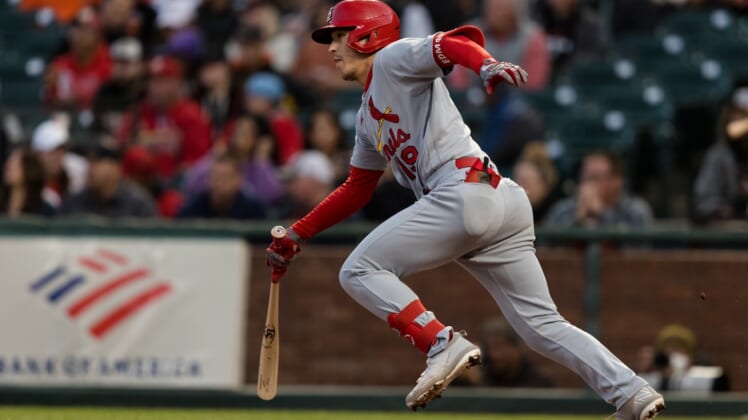 Tommy Edman and Tyler O’Neill combined for five hits and five RBIs, Miles Mikolas pitched 5 2/3 effective innings and the St. Louis Cardinals ran away from the host San Francisco Giants late for a 7-1 victory in the opener of a four-game series Thursday night.

Yadier Molina chipped in with his first home run of the season for the Cardinals, who won for the fourth time in five games. The homer was the 172nd of Molina’s career. The solo shot produced his 999th career RBI.

After Molina’s blast off Giants reliever Zack Littell (0-1) in the third, the Cardinals increased their margin to 3-0 in the fifth on a two-run single by Edman.

Activated from the COVID list before the game, Littell had taken over for opener Mauricio Llovera, who threw a 1-2-3 first inning.

Mike Yastrzemski got San Francisco back within 3-1 with an RBI single in the bottom of the fifth, but St. Louis broke the game open with a four-run seventh.

All of the scoring in the inning came with two outs, with Edman and Juan Yepez smacking RBI hits and O’Neill a two-run single.

Mikolas (2-1) worked into the sixth inning, charged with one run on seven hits in his 5 2/3 innings. He walked three and struck out three.

In a 3-1 game, he was replaced by Andre Pallante, who got Jason Vosler to ground out with the bases loaded to preserve the lead.

Edman finished 3-for-5 with three RBIs and O’Neill 2-for-5 with two RBIs for the Cardinals, who out-hit the Giants 12-10.

Molina, who had the game’s only homer, and Dylan Carlson each collected two hits and scored twice for St. Louis. Yepez also had two hits.

Yastrzemski, Wilmer Flores and Luis Gonzalez had two hits each for the Giants, who dropped their fourth straight. Gonzalez’s second-inning double was San Francisco’s only extra-base hit of the contest.