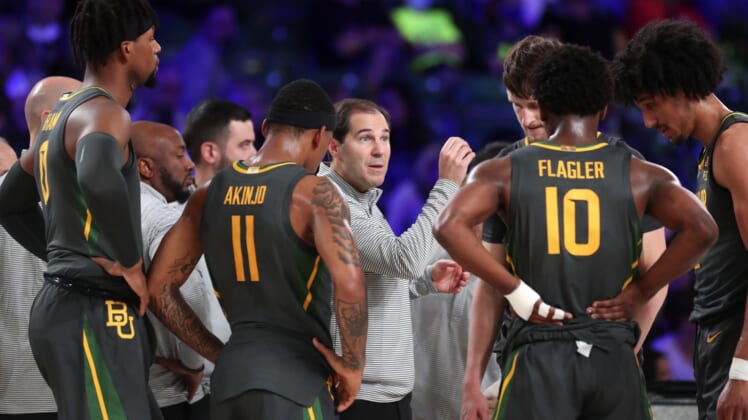 A pair of undefeated teams square off when No. 1 Baylor opposes No. 8 Iowa State in a Big 12 Conference showdown on Saturday afternoon in Ames, Iowa.

The defending national champion Baylor (12-0) surged to the top of the rankings in mid-December after beating then-No. 6 Villanova. The Bears have won 10 of their 12 games by double digits, including a 104-68 victory over visiting Northwestern State in their most recent contest Tuesday night.

The Bears have won 18 games a national-best in a row dating back to last season.

“For us as a staff, it’s really exciting,” Baylor coach Scott Drew said. “Because normally when you win a championship, you lose too much talent and experience to graduation or the pros to even have a chance the following year.”

Baylor will have to navigate some tough challengers in the Big 12, including the upstart Cyclones.

Iowa State (12-0) has blossomed into one of the surprises of the college basketball season under first-year coach T.J. Otzelberger. The Cyclones stumbled to a 2-22 record last season, losing their final 18 games, but they have defied all expectations by storming to a top-10 ranking.

“Our plan when we came in was to restore the pride in Iowa State basketball and to have the work habits every day to allow that to happen,” Otzelberger said. “As a coach, you never know when that will set in. You encourage your team to play hard every day and good things will come, but you don’t always know the timeline.”

Izaiah Brockington leads Iowa State with averages of 16.9 points and 8.4 rebounds per game. He is shooting 50 percent from the field and 42.3 percent from beyond the arc while also averaging 1.6 steals per contest.

Gabe Kalscheur is next on the scoring list with 11.2 points per game, and Tyrese Hunter ranks third with 9.8 points while distributing a team-high 5.1 assists.

Baylor is led in scoring by LJ Cryer with 13.6 points per game. Cryer did not play against Northwestern State because of a foot injury, but his absence reportedly was precautionary and he could play this weekend.

Kendall Brown is averaging 13 points per game for the Bears, and James Akinjo is not far behind with averages of 12.8 points and a team-high 6.3 assists. Adam Flagler is the fourth player on the team to average in double figures with 10.7 points per game.

Flagler said it felt good to seize the top ranking, but Baylor had its sights on bigger targets.

“It’s exciting,” Flagler said, “but we honestly don’t really think about that. Like Coach Drew says, the most important thing is being No. 1 at the end.”

This will be the 43rd meeting between the teams. Baylor has a 22-20 series edge with four consecutive wins.