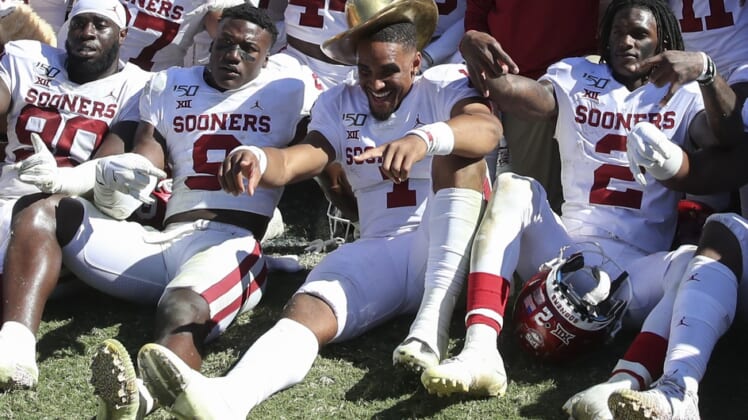 While many major colleges in Texas have announced this week that they’re planning on starting the fall semester on time, there’s renewed questions about the 2020 college football season.

Power 5 athletic directors believe that the season will take place in some form this fall. However, the reality of the situation is a bit different. Commissioners for the largest conferences in the nation just recently told Vice President Mike Pence that games will not take place if campuses are still closed.

It’s more of a state thing at this point. As Texas and other states start the process of opening up amid the COVID-19 pandemic, other states are playing it closer to the vest. How is this going to impact the sports world?

According to Big 12 Commissioner Bob Bowlsby, there’s certainly an issue when it comes to specific rivalry games. That’s no more true than one of the biggest games on the annual slate that pits Oklahoma against Texas in what has been known as the “Red River Shootout.”

“So you think about how does that happen?” Bowlsby said, via Chuck Carlton of The Dallas Morning News. “OK, in this new normal, how do we have one of the great sporting events in the entire United States, how do you have that at the Cotton Bowl when you’ve got to walk through 300,000 people gathered in the outer reaches. It’s those kinds of things that we’re going to have to think ourselves through.”

This could end up being a major downer for college football fans around the country. Even those without a rooting interest enjoy this game between two of the fiercest rivals in the nation. Based on the comments above, said game would likely have to take place without fans in attendance. As noted, it could be the new normal for the remainder of the 2020 calendar year.

From a more widespread perspective, Bowlsby doesn’t seem as confident as others when it comes to the 2020 season starting and concluding without an issue.

Something will have to be figured out on this end some time in the near future. The 2020 college football season is slated to start in late August.

As of right now, another big rivalry game is still expected to take place overseas. Within the states, it’s now all about flattening the curve and widespread testing.