Big 12 commish: ‘We will have disruptions’ in CFB season 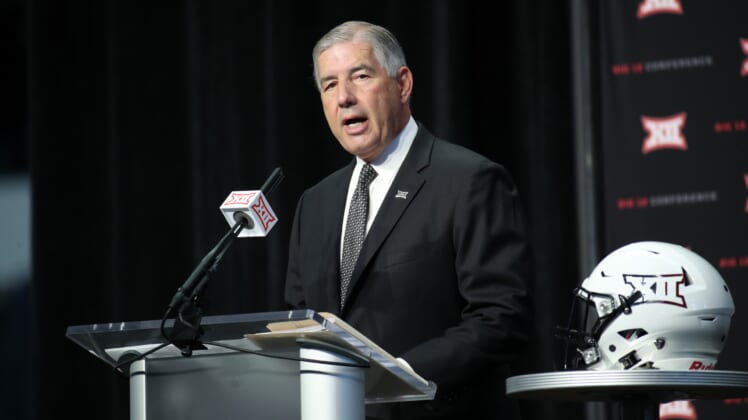 Momentum is building across the country for college football to be played this fall despite the COVID-19 pandemic. While many around the NCAA anticipate there will be a football season, Big 12 commissioner Bob Bowlsby issued a grim prediction for what will likely happen.

A day after the NCAA’s Division I Council voted to lift the moratorium on voluntary practices starting on June 1, Bowlsby warned the nation about how college football will likely play out in the fall. For as much hope as everyone across the country has at this point, one of the most prominent voices in college football made sure everyone knew this would be out of everyone’s hands.

“We also have to remember one thing: the virus is going to define how this progresses. We will have disruptions during the season,” Big 12 commissioner Bob Bowlsby said, via Get Up. “I fully expect that we’ll have an outbreak on Wednesday afternoon and games may need to be canceled on Saturday. We’ll need to understand shutdown procedures and how we go about quarantining when the need arises. Campuses are petri dishes for the delivery of viruses, and when the flu, cold and virus season comes back, we’ll have some challenges on our hands.”

It’s a telling quote from a conference commissioner that oversees universities that depend on college football. Estimates on Thursday projected Power 5 schools would lose billions of dollars if football isn’t played in the fall. Top schools have avoided eliminating programs due to budgetary restrictions to this point. However, if the shutdown of collegiate sports continues, they likely would have to follow the same path Bowling Green, Furman University and the University of Akron.

Universities have made it clear that their campuses need to be open, both to students and athletes, before college football games can be played. Fortunately, those steps are being taken with hundreds of schools creating plans to bring students back. However, there are also fears a second wave of the coronavirus is coming in the fall. South Carolina already accounted for it in its fall schedule, which is a troubling sign for any hopes of a college football season without disruptions.

The health of student-athletes will be the top priority for all schools. When a COVID-19 outbreak happens, which is likely as Bowlsby described universities as ‘petri dishes for the delivery of viruses’, college football will need to slow things down. It’s exactly why Oklahoma Sooners head coach Lincoln Riley ridiculed the plan of bringing players back early in June.

We will almost certainly see college football in the fall, especially given what hundreds of universities will lose if it doesn’t happen. But it’s just as likely that there will be sudden delays during the season that brings the beloved sport to a halt.