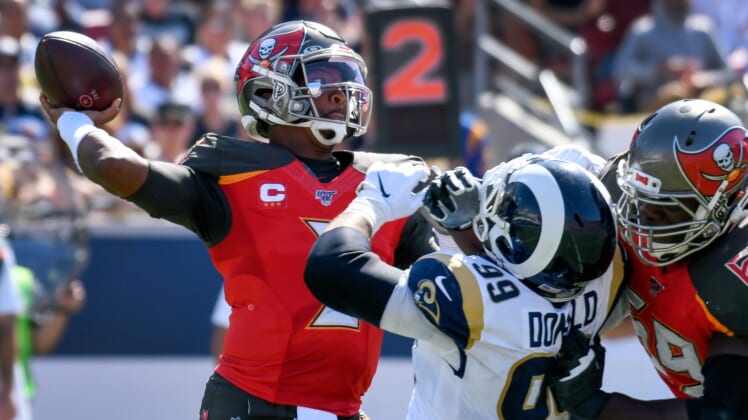 Some of the best quarterbacks in the business had rough outings in NFL Week 4, while one who’s known for making big mistakes came through in a big way.

It was a crazy weekend, and we wouldn’t have it any other way.

Without further ado, here’s a look at the best and worst quarterback performances from NFL Week 4.

As we predicted, the Titans were able to pass the ball on the Falcons’ injury-stricken secondary and pull off the upset in Atlanta. Mariota had a solid day overall, and his connection with rookie A.J. Brown was a sight to behold.

Though he only completed 18-of-27 passes, Mariota made the most of his efforts. He finished the game with 227 yards and three touchdowns, roasting the Falcons in their own building to help his team improve to 2-2 on the season.

The New England Patriots remained brutally effective against opposing quarterbacks on Sunday in Buffalo. Josh Allen threw three atrocious interceptions before he was forced from the game after a vicious helmet-to-helmet hit. His replacement, Matt Barkley, sealed the loss with an interception.

All told, Buffalo turned the ball over four times in a game that was the Bills’ for the taking. Both quarterbacks were lucky on fumbles, too, which were recovered by teammates. Just an awful game from Buffalo’s quarterbacks overall.

To nobody’s surprise, the Chargers had little trouble dispatching the Miami Dolphins at Hard Rock Stadium on Sunday, winning 30-10. Rivers was lethal, despite playing with an injury-depleted offense that missed Mike Williams, Virgil Green, and Justin Jackson, among others.

The veteran completed 24-of-30 passes for 310 yards with two touchdowns and no interceptions. Four players caught passes that went 20 yards or longer, and in total the Chargers had nine different players catch the ball in a surgical day passing the ball from Rivers.

Well, it finally happened. Keenum was so bad early during Sunday’s game against the New York Giants that Jay Gruden benched the veteran in favor of rookie Dwayne Haskins. For the second game in a row, Keenum threw an interception on the first drive of the contest.

Unfortunately, Haskins was no better. He threw a touchdown — to the other team — and finished with three picks compared to zero passing touchdowns.

Combined, Keenum and Haskins completed 15-of-28 passes for 121 net yards with zero touchdowns and four picks.

The Detroit Lions lost at home to Kansas City on Sunday, but nobody can blame Matthew Stafford for the loss. Playing through a painful hip injury, the veteran was superb.

Stafford was under plenty of pressure in the game and took four sacks. Despite that, and despite losing tight end T.J. Hockenson to a scary head injury in the second half, he led Detroit to a go-ahead touchdown late in the fourth quarter to cap off a tremendous game overall.

In the end, Stafford completed 21-of-34 passes for 291 yards with three touchdowns and no interceptions, adding another 18 yards on the ground.

The Patriots remained undefeated with a narrow win over the Bills in Week 4, but Tom was far from terrific. As usual, he attempted a high number of passes. But instead of shredding the Bills, Brady struggled to find his receivers and threw an uncharacteristically awful interception in the end zone.

A really bad decision on a throw that turned into a pick-six for Marcus Peters was the only blemish on Winston’s banner day against the Los Angeles Rams. Leading an attack that scored a franchise-record 55 points, Winston found great success on the road against an NFC powerhouse.

The fifth-year quarterback threw four touchdowns and had 385 yards on 28-of-41 passing. He distributed the ball to eight different receivers. Five of them had at least three receptions, and three caught touchdowns.

For a while there in the fourth quarter, it appeared Winston’s one big mistake might doom his team. But then he and his teammates rallied for the big win, and made a huge statement in the process.

Looking solely at Cousins’ passing stats (233 yards on 27-of-36 passing), one could conclude that he did okay on Sunday going against an elite Chicago defense.

However, Cousins couldn’t generate enough offense to beat a Bears team led by backup Chase Daniel, who was subbing for the injured Mitch Trubisky. He didn’t throw a single touchdown and got most of his passing yardage when the game was already over in the fourth quarter.

Cousins was also sacked six times, fumbled twice and lost one. He also had just one explosive play all game long (in garbage time) and played it way too safe, far too often.

The Packers lost a tough game on Thursday night to the Philadelphia Eagles, but Rodgers played his best game of the season. Completing 34-of-53 passes for 422 yards and two touchdowns, he absolutely shredded Philly’s defense all night long.

It’s not hard to imagine Green Bay would have won if Davante Adams had been able to stay in the game late, and if Matt LaFleur had shown better judgement in goal-line situations. Also, though Rodgers did throw an interception at the end of the game, he put the ball on the money, and Marquez Valdes-Scantling simply dropped it in tight coverage.

How does one pass for 517 yards and still end up as one of the worst quarterbacks in Week 4? It’s all about the turnovers, baby. Goff threw three awful interceptions Sunday in a crazy 55-40 loss to the Tampa Bay Buccaneeers.

He also lost a fumble, turning the ball over four times. The Bucs scored 28 points off those turnovers, including a fumble-six by none other than former teammate, Ndamukong Suh.

That was the difference (and then some) in the game.