November is an awesome time of year if you’re a college football fan. The weather is getting colder across the country and the stakes couldn’t be any higher.

Potential champions are starting to distinguish themselves from the pack. But every team, no matter its record, knows that every game in the 11th month is a big one. The time to truly make an impact on the season is dwindling, so heading into Week 12 of the 2016 season, the pressure was on.

Some players — five in particular — stepped up to the pressure and put on performances to remember. Others in the world of college football couldn’t live up to the moment and, unfortunately, they’ll find themselves called out in this list.

These are the best and worst performances from Week 12 of the college football season. 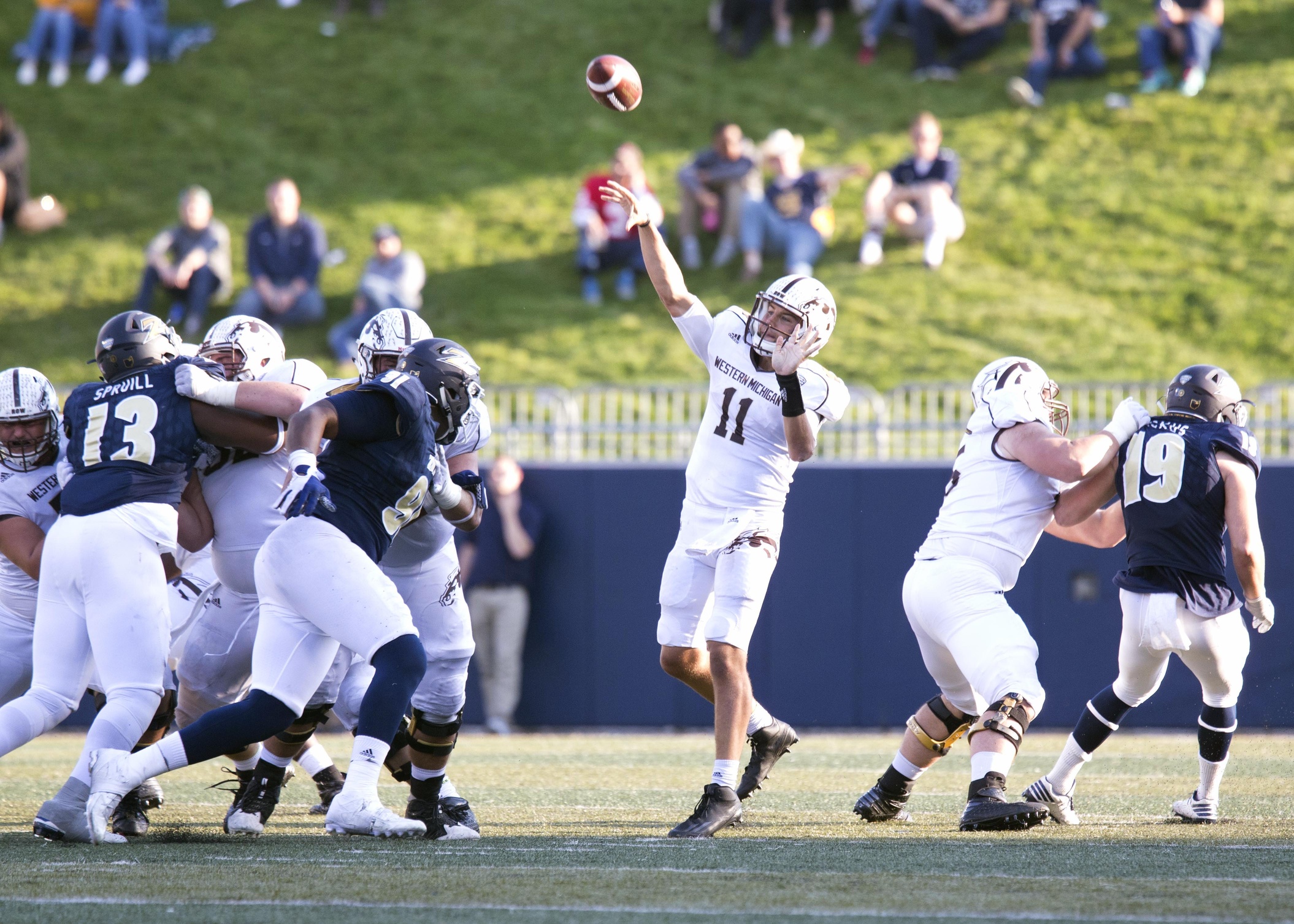 ESPN’s College Gameday was in Kalamazoo to highlight the Western Michigan Broncos, perhaps the best team the average college football fan doesn’t know much about.

Whenever the spotlight of Gameday is on a program and town, the eyes of the rest of the college football world turn to it. Talk about pressure, right? Or perhaps don’t, because WMU quarterback Zach Terrell thrived in the spotlight Saturday afternoon.

His Broncos came into the game against Buffalo undefeated and ranked No. 21 nationally, and they certainly lived up to the hype. Western Michigan beat Buffalo, 38-0, with the senior from Fort Wayne, Ind., leading the way.

Charlie Strong was tasked with building a program at Texas, but he may not be afforded much more time to see the process through. Strong’s Longhorns, who entered Week 12 with an underwhelming 5-5 record, dropped a 24-21 contest to Kansas.

This is not Kansas basketball were talking about, mind you. Rather, Texas lost to Kansas football, a team a that was 1-9 coming into the contest and on a nine-game losing streak.

That’s a game that a nationally recognized program like Texas just can’t lose, especially with the stakes being so high in Strong’s third season.

He won’t be around Austin for much longer after a loss like that.

Not to be outdone by Brian Kelly, Charlie Strong’s office right now: pic.twitter.com/6UK7WucjfR

After beating Cal, 45-31, No. 24 Stanford is on a four-game win streak. The Cardinal put up 555 total yards of offense, and you guessed it, all-everything running back Christian McCaffrey was a huge reason why.

It’s not a coincidence that McCaffrey’s recent uptick in play has corresponded with Stanford’s win streak. He’s notched 10 touchdowns in the past four games, three coming against the Golden Bears.

McCaffrey rushed for 284 yards and three touchdowns against Cal. It was a career high in rushing yards for the dynamic back, as well as a Stanford record. McCaffrey also caught four passes for 22 yards and returned one punt for 11.

For those keeping score at home, that’s 317 all-purpose yards.

It’s even more impressive seeing those yards in motion. One of those touchdown runs was of the 90-yard variety.

Louisville quarterback Lamar Jackson was considered the Heisman favorite heading into Week 12’s contest with Houston, but his status as the front-runner may take a hit.

Louisville, which was ranked No. 5 nationally, was beat by the Cougars, 36-10. Jackson threw for only 211 yards and a touchdown while rushing for just 33 yards on 25 carries. 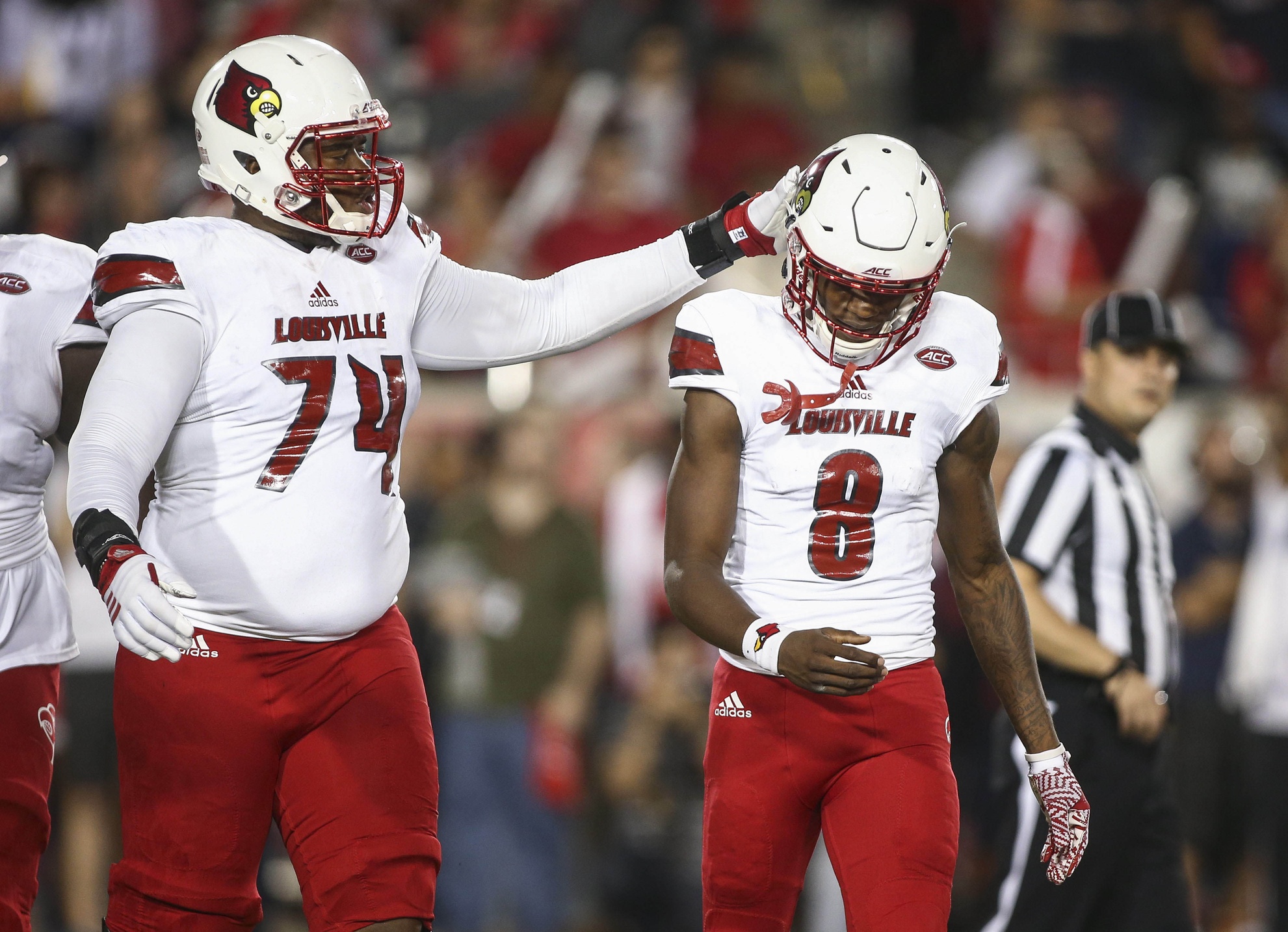 The rushing total, in particular, was shocking because it was Jackson’s lowest of this season. He’s been held to less than 100 yards only three other times this season, so the output was disappointing.

Of course, he wasn’t the only reason Louisville lost and it’s not like Houston is chopped liver — the Cougars were at one time a College Football Playoff favorite, remember. But this was the type of lopsided loss that Heisman favorites can’t have on their resume in min-November.

In an American Athletic Conference game that many around the nation likely didn’t bother to check out, SMU wide receiver Courtland Sutton put himself in the record books.

Sutton, a 6-foot-4, 215 pound sophomore wideout from Brenham, Texas, caught 13 passes against South Florida, putting up an astonishing 252 yards in the process. He also found the end zone twice and averaged nearly 20 yards per catch.

Unfortunately, Sutton’s winning effort was for a losing cause. SMU lost to USF, 35-27.

According to reports, LSU running back Leonard Fournette was not expected to suit up in Week 12’s colossal matchup between No. 23 Florida and the No. 16 Tigers, but he was emotionally forced into action.

There was a scuffle between the two teams before the game, and it apparently led to Fournette suiting up despite an ankle injury.

Here’s the thing, though: Fournette took it upon himself to shove one of Florida’s assistant coaches during that pre-game scuffle. He didn’t start it, but being the star he is, he certainly drew a ton of attention to himself.

As if Leonard Fournette needed any extra motivation for this game… pic.twitter.com/kz3TzPNSh9

He was obviously pumped up after the scuffle and wanted to put his money where his mouth was and run all over the Gators — teach them a lesson. Things didn’t end up working out in Fournette’s favor, though.

After shoving the Florida assistant coach and suiting up, he rushed only 12 times against the Gators for 40 total yards (no touchdowns). That’s 3.33 yards per carry, which is extremely underwhelming from a player many considered to be a Heisman candidate before the season.

Perhaps he shouldn’t have let his emotions trick him into suiting up while injured. Despite his inclusion into the lineup, LSU still lost, 16-10. 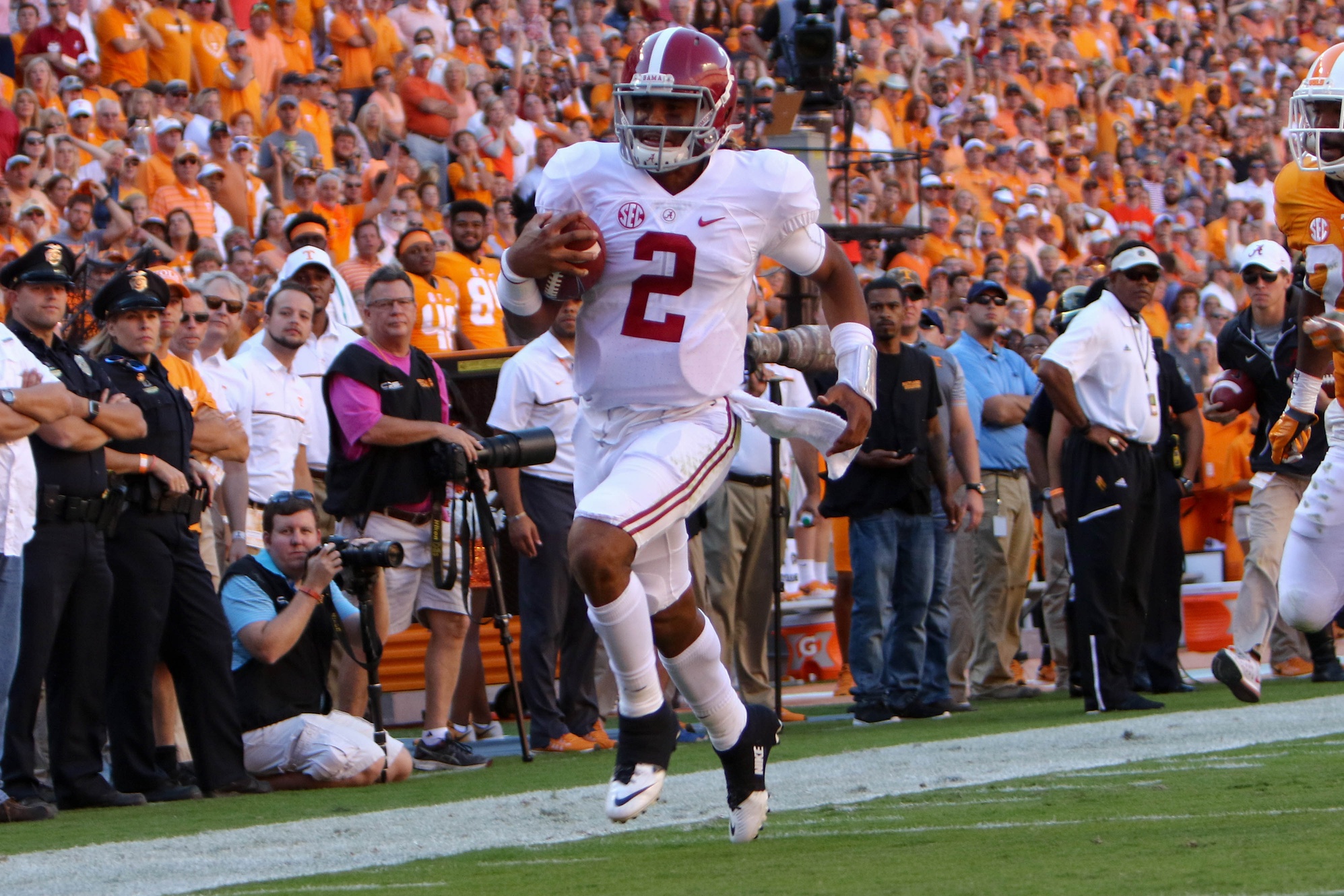 It’s almost unfair that No. 1 ranked Alabama is mentioned this far into this, but at this juncture, the Crimson Tide’s dominance is normal. Anything other than a huge game from Alabama — especially against the Chattanooga Mocs — would make news.

That’s not to discount the Crimson Tide or Nick Saban’s players, though. Because despite the opponent, they went out and played their game after a halftime tongue lashing by head coach Nick Saban, who was heated.

Letdowns are rare in Tuscaloosa, especially in November.

Once again, it was true freshman quarterback Jalen Hurts who stood out for the Tide. Though he’s known as a dual-threat quarterback, he mostly hurt (pun intended) the Mocs with his arm.

Hurts completed 15-of-21 passes for only 136 yards, but he did throw three touchdowns. He also rushed 16 times for 68 yards, and more importantly he has Alabama one game away from an undefeated regular season as a freshman.

That said, Rutgers being shut out by the Nittany Lions, losing 39-0, is a disgrace. Even Chattanooga was able to put up three points on the Crimson Tide.

Rutgers is on an eight-game losing streak, and with a game at Maryland coming up, Chris Ash’s team will likely end up losers of nine in a row to end the season.

No. 9 Oklahoma took care of business in Week 12 by beating a dangerous West Virginia team, 56-28. WVU was ranked No. 14 nationally heading into the game.

The Sooners obviously put up a ton of points and quarterback Baker Mayfield had a good game (he had four total touchdowns, with two coming on the ground) but one Oklahoma defender, in particular, deserves a shout out.

Jordan Evans finished the game with five tackles and a forced fumble, but it was the play below that will garner him the most praise.

The 80-yard pick-six was Evans’ second of the season. He took an interception back 33 yards for a score a few weekends ago against Kansas.

Evans did tweak something on the play and he didn’t see action for the rest of the game, but perhaps he didn’t need to. His impact against WVU was huge. Any time a defender can put points up on the board for his team, that’s a big deal.

TCU came into its matchup with No. 11 Oklahoma State as a dangerous opponent. The Horn Frogs had just knocked off No. 17 Baylor, 62-22, and junior running back Kyle Hicks had himself a ball game. Hicks rushed 26 times for 192 yards and five touchdowns against Baylor.

If he even found the end zone once against Oklahoma State, it could have helped TCU’s chances, but Hicks wasn’t able to find lighting in a bottle for the second game in a row.