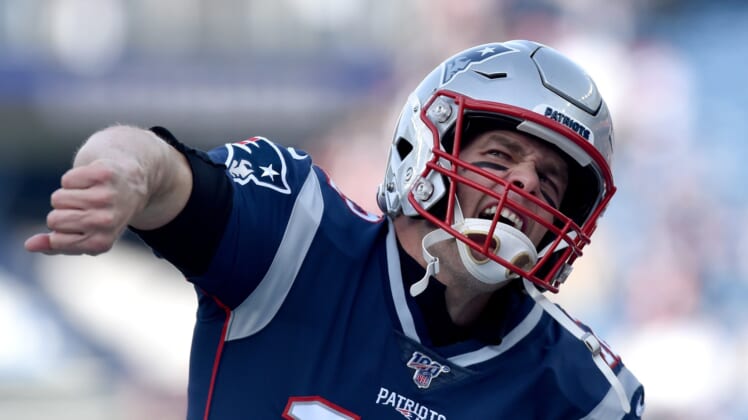 While Tuesday’s offseason action in the NFL might not have delivered as many big moves as Monday, there was no shortage of headlines and shakeups across the NFL. As the league’s tampering period nears its end with the new league year set to begin Wednesday, it’s clear this NFL offseason will be one to remember.

It started early on Tuesday when Tom Brady announced he is leaving the New England Patriots after 20 seasons to join a new team. The shocking news served as the perfect opener for a day that saw top quarterbacks on the move and plenty of money awarded to top defenders.

While the new league year won’t begin until Thursday, we still saw plenty of movement once again from NFL teams. Here are the best and worst moves from the NFL’s

While it’s the move everyone saw coming, that doesn’t take away from its significance. There are only a few spots where Rivers would be in good position to be successful and he picked the best one. It’s more than just the offensive line that will protect him, giving him the sense of security in the pocket that he hasn’t had in years. Being reunited with Frank Reich and Nick Sirianni, who worked with him during his best years with the Chargers, make this the perfect spot for Rivers.

The Colts are ready to become contenders in the AFC, as we explained in-depth here. It started on Monday with the trade for DeForest Buckner, a move that will lift this entire defense for years to come. Better yet for the Colts, Rivers agreed to a one-year for $25 million. The move takes advantage of their cap space without putting their long-term financial flexibility at risk. An outstanding move for the Colts and, at the very least, they should now coast to a division crown next season.

The Dallas Cowboys took a low-cost, high-reward gamble on Robert Quinn last offseason and he rewarded them with 11.5 sacks. If the Bears get the 2019 or 2013 version of Quinn, when he recorded 19.5 sacks and 23 tackles for loss, a five-year, $70 million deal can be justified.

But Chicago gave $30 million guaranteed to a player entering his age-30 season with a long history of inconsistency and injuries. He played in just 17 games from 2015-16 and after recording 10-plus sacks in three of his first four seasons. Then, Quinn couldn’t crack nine sacks in his next four years. The Bears took the optimistic view by believing Quinn will stay healthy and produce alongside Khalil Mack, but there is a significant and now costly downside if Quinn doesn’t repeat his success.

The Raiders didn’t hide their intention to spend big this offseason and they’ve done that. Even after missing out on Byron Jones, the Raiders stayed aggressive and landed an outstanding talent on Tuesday. Cory Littleton, an undrafted free agent in 2016, emerged as a force in the middle of the Los Angeles Rams defense and can bring that same impact to Las Vegas.

The 26-year-old linebacker excels in coverage and will be the perfect piece to cover running backs in a division with Austin Ekeler and Damien Williams. He also loves matching up against tight ends, which is especially crucial against Hunter Henry and Travis Kelce. He’ll pair nicely with recently-signed linebacker Nick Kwiatkoski, giving the Raiders a linebacker corps that will help turn this defense around in 2020

Whereas the Raiders signed a legitimate playmaker to upgrade at inside linebacker, Giants general manager Dave Gettleman saw a linebacker that fits perfectly into the 1990s and gave him $10 million per season. Martinez is certainly young and the 26-year-old linebacker is technically an upgrade over what the Giants had before. While his 155 tackles this past season seems impressive, consider that the Green Bay Packers are desperate for help at inside linebacker and they happily let Martinez walk.

The issue with Martinez is that he’s not particularly reliable against the run. He lets the play come to him and that means tackling the running back after he gains four-plus yards. That in itself is problematic, but even more worrisome is Martinez simply can’t be trusted in coverage. He’ll rack up 100-plus tackles for as long as the Giants keep him on the three-year deal, but he won’t do much else. It’s a bad move by the Giants, but that’s not surprising given Gettleman’s history of decisions.

Best: Panthers build a bridge to the future with Bridgewater

The Carolina Panthers are undergoing an organizational rebuild, which will ultimately push Cam Newton out the door. Before negotiations for a trade even began, though, the Panthers agreed with Teddy Bridgewater to become their new starting quarterback. A three-year, $63 million deal could prove to be a win-win move for both Bridgewater and the organization.

The 27-year-old quarterback reunites with offensive coordinator Joe Brady and will have a chance to have a career-best season with one of the game’s best offensive minds. Bridgewater also lands the big contract that seemed impossible just a few years ago when he suffered a devastating knee injury. Meanwhile, the Panthers land a quarterback who can help them be competitive next season and still allow the team to potentially land a franchise quarterback in the 2021 or 2022 NFL Draft. This is a win-win scenario and things could even work out for Newton, depending on which team acquires him.

It’s hard to comprehend exactly what this team’s plan is. The Jaguars came into the offseason with two very talented players in A.J. Bouye and Calais Campbell, and they traded them for a fourth- and fifth-round pick to clear cap space. Jacksonville wants to try and use that space to sign Yannick Ngakoue to a long-term deal, but the franchise-tagged star wants out of town. In the likely event that Ngakoue finds his way out, the Jaguars will be even thinner on defense.

All of that is what makes the signing of Joe Schobert a strange move. The 26-year-old is certainly talented and his skills in coverage will make for a nice addition to a defense that has lacked that ability at the position. The thing is, though, Schobert’s coverage skills won’t matter if the Jaguars can’t pressure the quarterback and their cornerbacks are getting burnt. A rebuild made sense for the Jaguars, operating as a below-average team that isn’t good enough to compete but not bad enough to get a top-five pick is not where any organization should want to be.

The Detroit Lions gave an offensive tackle with 20 starts since 2015 a five-year, $50 million contract. Meanwhile, the Chargers came out of Tuesday celebrating when they learned right tackle Bryan Bulaga accepted their three-year, $30 million offer. While the 30-year-old might be older than Halapoulivaati Vaitai, he’s simply a better player.

Bulaga is an outstanding upgrade for a team that desperately needed help at offensive tackle. He can step in immediately and will excel in pass protection, which will be music to the ears of whoever starts at quarterback for the Chargers. The contract is very reasonable, and the team landed a great player while filling an obvious need. If the Chargers can find a solid left tackle in the 2020 NFL Draft, an offensive line that used to be this team’s greatest weakness will become a strength. This could go down as one of the best moves in the NFL this offseason.

Worst: Buccaneers go over the top for Tom Brady

There simply wasn’t a lot of competition to sign Brady. The Patriots made an effort, but reports made it clear that Bill Belichick wasn’t devoted to bringing Brady back and the future Hall of Fame quarterback wanted a change of scenery. Meanwhile, the Tennessee Titans took themselves out of the race and the San Francisco 49ers basically didn’t return Brady’s texts. The Los Angeles Chargers also didn’t stand a chance given Brady’s reported desire to stay east. Yet, despite all of that, the Buccaneers gave Brady a massive contract and potentially even more power.

Brady didn’t play like a quarterback worth $30 million per year last season. He showed obvious signs of decline as a 42-year-old, which is expected. Now he’ll be asked to work in an offense that attempted 630 passes this past season and loved to take deep shots. Meanwhile, the Buccaneers were reportedly happy to give him some control over the roster and that could mean even bringing in Antonio Brown. Tampa Bay’s offense must now undergo a complete system overhaul for a player entering his age-43 season and he might want to bring drama with him. All of that and a $60 million contract when the Buccaneers were realistically bidding against themselves. This move doesn’t deserve the praise it’s going to receive and we’d be shocked if this team makes it to the NFC Championship Game.