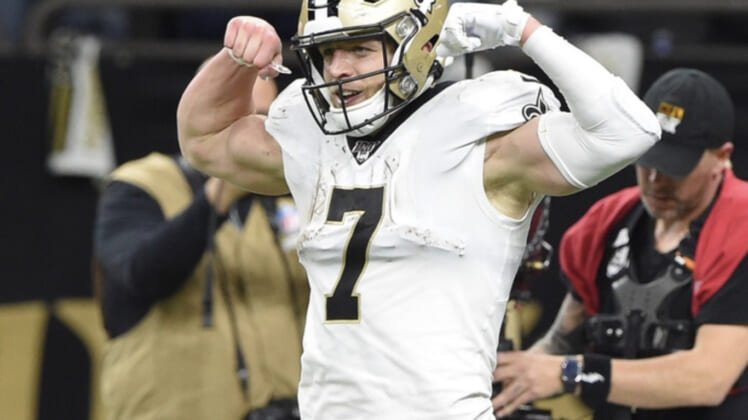 Now that Drew Brees has decided to return for another season with the New Orleans Saints, the future of two backup quarterbacks on the roster is up in the air.

Former first-round pick Teddy Bridgewater is slated to leave in free agency and could receive up to $30 million annually on the open market. The future of former BYU quarterback and undrafted free agent Taysom Hill is more up in the air. Seen by some as a gimmick quarterback, Hill believes he’s a franchise quarterback and has been backed up by some around the league.

Set to become a restricted free agent, Hill could very well remain with the Saints. There’s also a chance they place a high restricted tender on Hill in hopes of recouping draft picks via a contract offer from another team or a trade.

Here’s the deal: At 29 years old, Hill has thrown a grand total of 13 regular-season passes without a single touchdown in his career. Despite this, some believe he’s a legitimate starter in the NFL.

It’s in this that we look at the best potential fits for Hill should the Saints decide to let him walk in free agency or trade the signal-caller. The number of teams are limited.

Las Vegas Raiders: We already know that Jon Gruden is looking to make a splash. If option A is not available, Hill makes sense.

New England Patriots: Bill Belichick and Co. will be stuck between a rock and a hard place should Brady decide to leave in March.

Miami Dolphins: Even if the Fins were to draft a quarterback this coming April, it stands to reason that they need a stopgap option under center.

Pittsburgh Steelers: Ben Roethlisberger plans to be completely healthy for the 2020 season. If so, he’ll be the starter. However, there’s a lot more to look at here.

There’s a reason Hill has been bandied about as a potential starter since the end of the season. He’s intriguing to teams in need of an upgrade at quarterback.

Now that New Orleans will have Drew Brees under center next season, there’s a good chance the team will look to move Hill for draft pick assets.

If that’s the case, s of teams will be interested. It won’t be limited to the four we have listed here.