The surgeon who repaired Joe Burrow’s left knee says the Cincinnati quarterback is “all systems go” for the Bengals’ Sept. 12 season opener against the Minnesota Vikings.

Dr. Neal ElAttrache of the Kerlan-Jobe Institute in Los Angeles, who repaired the rookie’s torn ACL, MCL and PCL on Dec. 2, updated his patient’s condition in a text message to ESPN on Tuesday.

“He’s on track for full go for start of the season,” ElAttrache wrote. “He’s doing all the work. He’s worked his tail off and been an amazingly mature participant in his recovery. He’s focused and great to work with.”

Burrow, who sustained the injury on Nov. 22 at Washington, is unlikely to participate in the preseason as those games fall within the generally prescribed nine-month window for avoiding contact after such a surgery.

“We are very happy with his recovery to say the least,” ElAttrache said. “Notwithstanding the nature of his injury and extent of his reconstruction, his knee is performing perfectly.

“We just had him tested out here with a high-tech video and biomechanical evaluation and he was ahead of where we anticipated and well into the return to performance phase of his recovery. With him already performing this way, it’s ‘all systems go’ for the start of the season.”

Burrow, 24, was the No. 1 overall pick in the 2020 NFL Draft after winning the Heisman Trophy and leading LSU to an undefeated national championship.

He started 10 games for the Bengals and completed 65.3 percent of his passes for 2,688 yards with 13 touchdowns and five interceptions. Cincinnati went 2-7-1 in his starts. 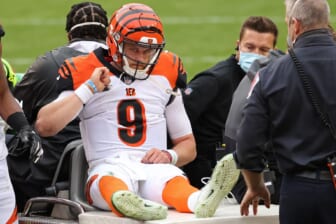