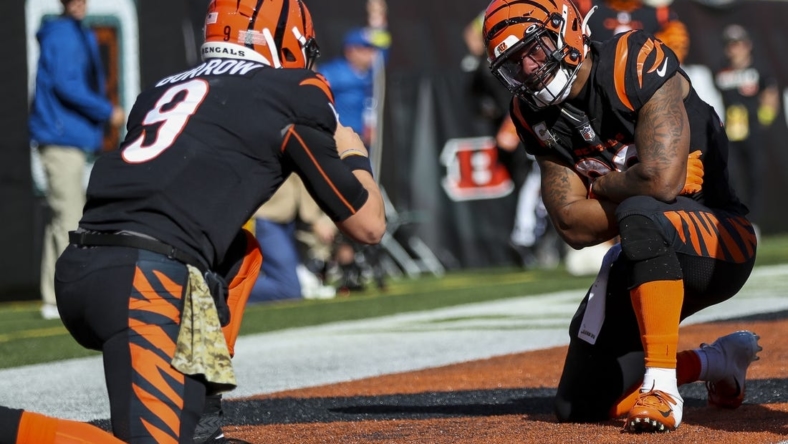 Mixon rushed for his first three scores and caught a touchdown pass just before halftime.

Mixon gained 153 yards on 22 carries and had four catches for 58 receiving yards.

Baker Mayfield threw two touchdown passes in relief for the Panthers (2-7), who failed to bounce back after their overtime loss a week earlier at Atlanta.

Mayfield was 14 of 20 for 190 yards after starter PJ Walker went 3 of 10 for 9 yards with two interceptions in the first half.

It was such a dominating first half for Cincinnati that when the Bengals pulled ahead 21-0 midway through the second quarter, the Panthers had just 15 yards of total offense.

The Bengals marched 90 yards in nine plays on the game’s opening possession, with Mixon scoring on a 2-yard run. In the first minute of the second quarter, Burrow capped a 10-play drive with a 1-yard plunge.

The Bengals made it 21-0 on Mixon’s 3-yard run with 7:29 to play in the first half, concluding another nine-play drive.

The turnover led to Mixon’s 1-yard TD run. He caught a 12-yard TD throw from Burrow with 12 seconds to play in the first half. That was set up following Jessie Bates III’s interception.
Mixon had 171 yards of total offense in the first half.

The Panthers dropped to 1-3 under interim coach Steve Wilks following the firing of Matt Rhule.