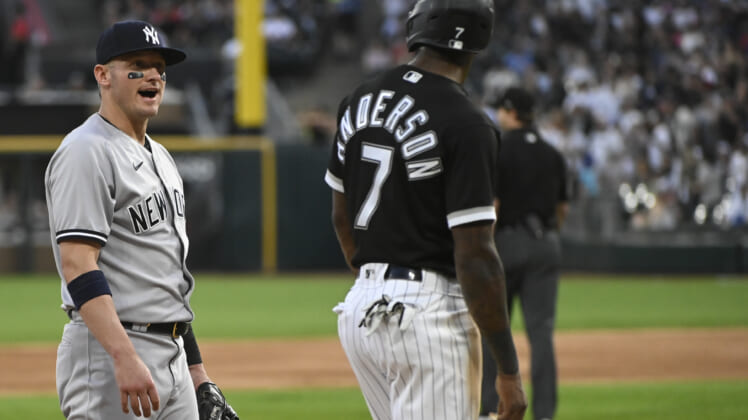 Tensions at Yankee Stadium have risen thanks to multiple heated moments in the Chicago White Sox vs New York Yankees matchups over the past two weeks. It’s their seventh time playing one another in the past 10 games, providing a strong familiarity amongst the competitors.

A week ago, Josh Donaldson appeared to light the match with a hard tag on White Sox shortstop Tim Anderson as he attempted to get back to third base, with umps ruling Donaldson had pushed the runner off, preventing a safe passage back.

This may have been the start of the bad blood between the two, but it’s worth noting Donaldson and Anderson have faced each other frequently in their AL Central meetings over the past two years.

Still, benches didn’t clear in their earlier matchup, even after Donaldson shoved Anderson off the base. What led to today’s altercation?

On Saturday, Donaldson and Anderson appeared to re-engage in their beef from May 13 with the two talented ballplayers getting into a heated discussion.

While players were supposed to be getting prepared for the inning change, they instead were focused on whatever it was Anderson and Donaldson were discussing. Apparently, one player in particular was more bothered by it than others.

As Donaldson was coming up to bat in the bottom of the fifth inning, White Sox catcher Yasmani Grandal let the Yankee know he took issue with his actions from earlier.

That’s when all hell broke loose.

Here’s the clip, courtesy of Matt Johnson of Sportsnaut.

While we frequently see punches, kicks, and other violent acts during bench-clearing scuffles, this one appeared to be just a battle of words, keeping everyone safe and sound. Still, it created quite the scene in New York.

Related: MLB insider expects next Aaron Judge contract to be worth $300 million