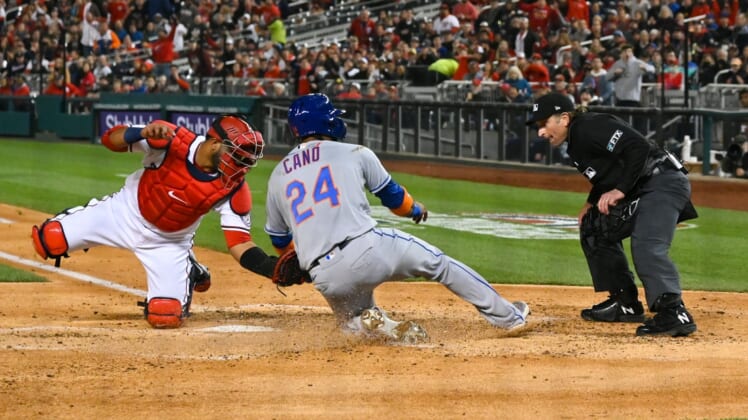 Scherzer (1-0) allowed three runs on three hits, striking out six and walking one. After his first start was pushed back due to a hamstring issue, the 37-year-old right-hander threw 80 pitches and retired eight of the last nine hitters he faced.

Jeff McNeil had a solo home run and two singles, and Starling Marte drove in three runs with a pair of hits for New York, which went 5-for-14 with runners in scoring position.

The benches emptied in the fifth inning when New York’s Francisco Lindor, squaring to bunt, was hit in the face by a Steve Cishek pitch. Lindor left the game and Cishek was ejected. The Mets later announced X-rays on Lindor’s jaw were negative and that he passed a concussion test.

Three Mets were hit by pitches in Thursday’s game.

The Nationals took a 1-0 lead in the second when Yadiel Hernandez’s sacrifice fly scored Bell, who was hit by a pitch in the foot leading off.

McNeil’s line-drive homer to right tied it 1-1 in the third and the Mets pulled ahead 3-1 in the fourth. Lindor led off with a walk and went to third on Eduardo Escobar’s double. Both runners scored on Robinson Cano’s single.

Scherzer couldn’t hold that lead, however. Nelson Cruz led off the bottom half with a single and Bell connected with a 1-2 fastball, homering to right center.

Brandon Nimmo tripled leading off the Mets fifth and Marte followed with an RBI-double. Cishek came on for Washington, but his second pitch hit Lindor.

New York padded its lead in the sixth. Mark Canha and McNeil singled and were sacrificed to second and third. Victor Arano struck out Nimmo, but Marte lined a 3-2 pitch to left center for a two-run single that made it 6-3.

McNeil added an RBI-single in the ninth.