Philadelphia 76ers guard Ben Simmons is at the center of NBA trade rumors this summer and the organization has discussed blockbuster deals with multiple teams. But, despite his awful stretch in the NBA Playoffs, it’s going to take a lot to acquire the All-Star guard.

Simmons’s trade value remains high around the NBA, with many teams confident that a change of scenery could help him turn things around. While the 76ers would like to keep the 24-year-old guard because of his outstanding defense, the level of interest around the league could bring in another star more suited to play alongside Joel Embiid.

While we’re weeks away from seeing any real movement on a deal, teams are reaching out and plenty of hypothetical trade packages are being suggested. The Cleveland Cavaliers are mentioned as one potential landing spot for a deal, but it might cost far more than people realize.

The Athletic’s Jason Lloyd broke down the Cavaliers’ offseason trade plans, touching on Simmons. When he asked an NBA executive if Cleveland could land Simmons with a package of Collin Sexton and Kevin Love, he was immediately told there was “no chance, Philly can do better.”

There are still four years remaining on the original five-year, $177 million contract Simmons signed with the 76ers. The level of contract control, even at a high salary, makes him attractive to NBA teams that struggle to bring in star talent via free agency.

Simmons, an ALl-Defensive First Team selection each of the past two seasons, is incredibly valuable. A 6-foot-11 player with the ability to guard every position makes him the ultimate chess piece on defense. While he can’t be trusted as a shooter, his passing skills and vision would make him a good fit on a team with perimeter shooters. 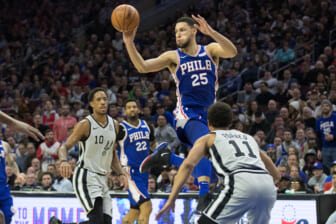 It’s understandable why the 76ers would likely reject a trade package centered around Love and Sexton. Love is playing on one of the worst contracts in the NBA and Sexton is headed for a max contract. For now, Philadelphia is setting its focus on a much bigger return.