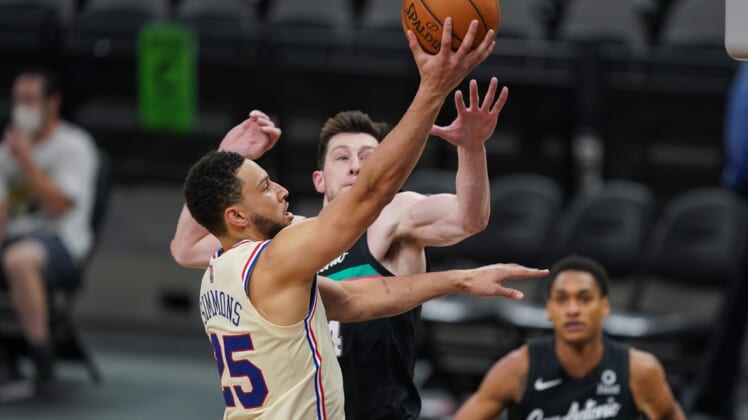 Ben Simmons made a game-winning tip-in at the buzzer and Joel Embiid scored 34 points and took 12 rebounds as the Philadelphia 76ers outlasted the short-handed San Antonio Spurs 113-111 on Sunday in a wild game in the Alamo City.

The 76ers (43-21) had to work hard to hold fast San Antonio, as the Spurs, down four starters, tied the game at 107 with Keldon Johnson’s putback layup with 1:03 to play. Misses by both teams in the final minute sent the game to an extra period.

Points were at a premium in the overtime, and Rudy Gay’s driving layup with 19.1 seconds left tied the game at 111. Embiid’s shot with one second remaining bounced off the rim but Simmons leaped high and tipped in the rebound to provide the 76ers their fourth straight win.

Simmons’ tip-in was the 76ers’ only basket in overtime. Philadelphia remained atop the Eastern Conference standings thanks to the victory.

The 76ers never trailed, rolling to as much as a 17-point lead in the first quarter and owning a 37-27 advantage after the first 12 minutes. San Antonio pulled to within 55-52 after a 3-pointer by Walker with 1:15 to play in the half, but Philadelphia answered with back-to-back buckets from beyond the arc from Curry and Danny Green to rebuild a 61-52 edge at the break.

Embiid led all scorers with 19 points in the first half, with Curry adding 14 for the 76ers. Walker’s 16 points off the bench paced the Spurs at the half while Gay hit for 11.

The game was the first of a back-to-back for both teams, with the Spurs playing in Utah on Monday while the 76ers play in Chicago.

The Spurs played without DeMar DeRozan and Jakob Poeltl (rest) and Dejounte Murray (left knee injury. Derrick White is also out for San Antonio, likely for the remainder of the season, with an ankle injury.