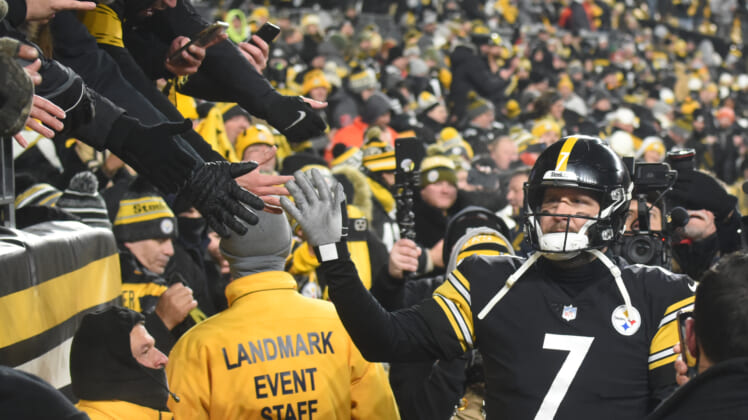 Ben Roethlisberger and the Pittsburgh Steelers took care of business against the Cleveland Browns Monday night, winning by the score of 26-14.

By virtue of this win at Heinz Field in Pittsburgh, the Steelers kept their playoff hopes alive. They’ll now take on the Baltimore Ravens on the road Week 18 needing some more help to keep the season alive.

However, Monday night’s game was about a whole lot more. Rumors have persisted that Big Ben will call it quits following the 2021 campaign, ending what has been a Hall of Fame-worthy 18-year career.

While Ben Roethlisberger has yet to officially announce his retirement, everything we saw in Pittsburgh Monday evening leads us to that conclusion.

Following the Steelers’ big win, a big “THANK YOU, BEN” note was posted on the scoreboard inside Heinz Field.

For the game, Roethlisberger completed 24-of-46 passes for a mere 123 yards with one touchdown and one interception. It wasn’t his greatest performance, but it was darn clear that Big Ben took in the scene with his family as he exited the field for what will likely be the last time.

As for the Steelers, head coach Mike Tomlin pretty much confirmed that this is it for the franchise quarterback after 18 impressive seasons.

“Just a beautiful thing,” Tomlin told reporters regarding Roethlisberger going out this way at home.

Amazing scene as Ben Roethlisberger wraps up his career in Pittsburgh

It was a surreal scene. A former first-round pick taking over as Pittsburgh’s starter during his rookie season back in 2004 and not looking back. Two Super Bowl titles. A whopping 15 winning seasons. The Steelers’ all-time leader in games started, wins, completions, attempts, yards and touchdowns.

None of this was lost on those who took in the scene as Big Ben made his exit from the field and prepares for what will likely be one final game in a Steelers uniform.