Ben McAdoo slips up, says Sam Darnold is Panthers’ starter: What it could mean for Carolina 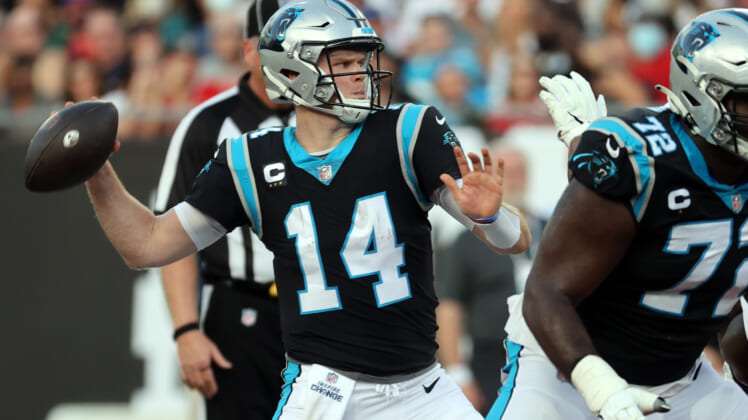 Have the Carolina Panthers been playing us all along? Or is this latest “slip-up” an even bigger plot to throw us off their scent? Ooh, the offseason rumors are in full swing.

The latest comes in the form of new Panthers offensive coordinator Ben McAdoo, who reportedly is a big believer in Sam Darnold. Speaking Tuesday for the first time since taking the Panthers’ gig, McAdoo was quick to anoint Darnold the starter. Perhaps too quick.

Despite some past transgressions that didn’t go his way, McAdoo is a bright individual with a master’s degree. What are the chances that he wasn’t prepared or expecting such a question from the local media? Chances – 0%.

McAdoo likely did this on purpose. Even if you’re dumb enough to make such a mistake to the media, you don’t double down and soft toss a home run ball to reporters by saying “That’s something I shouldn’t have said”. He said it, the toothpaste is out of the tube.

Whether you choose to believe it or not, this was done in an attempt to throw others off their trail. The Panthers want others to believe they’re not looking at trading for Baker Mayfield or Jimmy Garoppolo or drafting one of the top quarterbacks in the 2022 NFL Draft, whether at No. 6, or by moving up or down the board. Thanks to a lack of draft picks (see Darnold trade), the Panthers would love to trade down, which could be the motivation behind this little media scrum.

Chances are, McAdoo would have said just about anything to get the job he has today, and it seemingly worked. The Panthers have bought in. Now they just need to sell their fanbase on the idea of running it back, hoping for drastically improved results.

Basically, in addition to not having Christian McCaffrey, which is a big deal in itself, the Panthers are saying Joe Brady was the problem, offensively. Yet, nobody buys what they’re selling.

What if McAdoo made a mistake? Is Darnold the QB1?

OK, OK, so what if McAdoo is just proving to everyone he’s not some Brylcreem-fueled machine? What if he’s actually human and does make mistakes? Let’s dive in.

Right now, McAdoo was right. Darnold is the starting quarterback for the Panthers. But there’s no guarantee they can:

For those reasons, it’s better to continue placing Darnold atop the Panthers’ depth chart. As of right now, he’s the best quarterback on the roster. That could change once training camp rolls around, but he has the experience and will have a leg-up on learning the offense too.

Pretty much the only scenario where Darnold isn’t expected to be under center at the start of the 2022 football season is if the Panthers decide trading for Mayfield or Jimmy G is their best method. Which, by the way, probably is their best option if contending is the top priority for Matt Rhule to keep his job for 2023 too.

That doesn’t mean there isn’t a better quarterback in this draft class, but Darnold has four years of starting experience to draw from, which is a huge advantage to begin the year. Basically, the job is Darnold’s to lose.