Ben Crane shoots 62 to take over lead in Bermuda 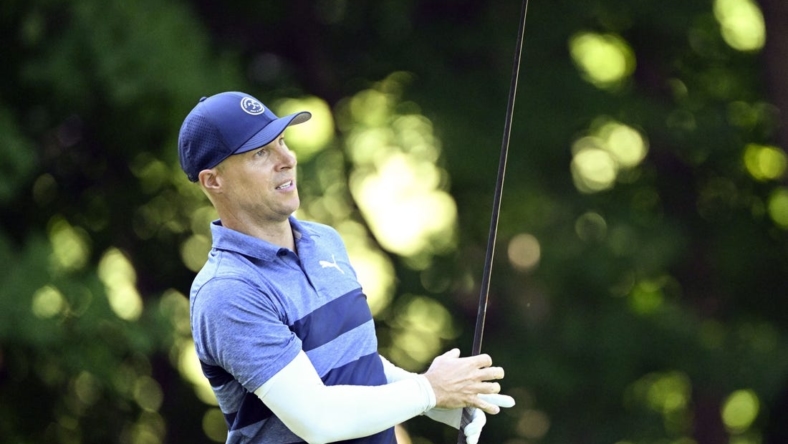 Ben Crane fired a 9-under-par 62 to take a one-shot lead after a mostly complete second round at the Butterfield Bermuda Championship on Friday in Southampton, Bermuda.

Play was suspended due to darkness, but only Argentina’s Tano Goya and Bermudian amateur Jarryd Dillas had one hole left to complete. Goya needs a par or better to make the cut at 6 under, and Dillas (3 over) will miss the cut.

Crane, 46, last won on the PGA Tour in 2014. That didn’t stop him from battling the elements better than most of the field on a day when the weather turned from sunny to sour.

Crane opened on the back nine at Port Royal Golf Course and shot four birdies and two bogeys before making the turn. He sank birdies at Nos. 1-4, holed out for eagle at the par-4 sixth and birdied No. 7 for a 7-under 29 coming in.

“No. 6, par 4, in the fairway, have about 115 yards, playing a little more than that,” Crane said of the eagle. “I think I was playing about a 118 shot. Hit a really quality distance wedge … Sometimes you kind of picture them, you look up and it’s, ‘Man, that’s just like I pictured it.’ Lined up with the pin, landed a few paces passed the hole, spun back and went in.

“I was having an incredible day and then that happened. I was like, ‘Wow, this is all going my way.’ ”

Another veteran kept Crane company near the top of the leaderboard. The 41-year-old Baddeley, whose last tour victory came in 2016, compiled a card of eight birdies and one bogey for his 64.

“Even on the back nine there I hit some really nice shots in there close, but just burnt the edges coming in,” Baddeley said. “So (I) would have liked a couple more, but still was a good day. With the golf course, depending on how the wind blows, when there’s not too much wind you’ve got to make birdies. When there’s wind, it shows some good scores but it’s a little more difficult.”

Baddeley had to qualify for the field the Monday before the event. He birdied the first hole of a playoff at the qualifier to make it.

Smotherman was tied for the lead after a first-round 62 and is still in contention entering the weekend. Along with much of the field, he had to play through high winds and some rain.

“More difficult than yesterday, but I mean, I’m very pleased with where we finished up,” Smotherman said. “Four under today in these conditions I’m happy with, and we only left some out there with a couple three-putts. Regardless of conditions, (I) like to keep those off the card, but happy to be playing where we’re at going into the weekend. Still a lot of golf left.”