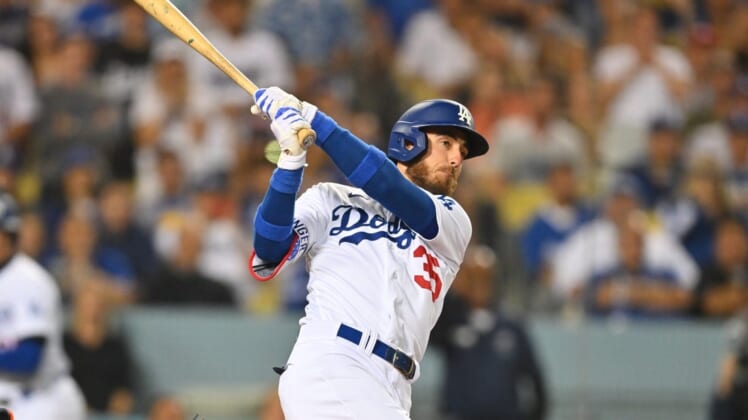 Cody Bellinger hit a go-ahead grand slam in the eighth inning and the Los Angeles Dodgers pulled out a 5-1 victory over the visiting San Francisco Giants on Friday.

Mookie Betts and Freddie Freeman each had two hits as the Dodgers extended their winning streak to six games with 13 victories in their last 14 contests and 17 in their last 19. The Dodgers also improved to 4-0 at home against the rival Giants this season.

Yermin Mercedes drove in a run for the Giants, who had a grand slam of their own on Thursday against the Dodgers from Darin Ruf but still dropped a 9-6 decision.

The Dodgers looked as if they might blow their chance to take the lead in the eighth when Gavin Lux struck out with runners on the corners and one out. Jake Lamb was hit by a pitch to load the bases before Bellinger ripped a line drive inside the right-field foul pole on an 0-2 pitch from left-hander Sam Long (1-3).

The Dodgers threatened to take off early when they loaded the bases in the first inning on a Betts single and two-out walks from Will Smith and Max Muncy. Lux added another walk for a run before Giants starter Logan Webb escaped the jam by getting Jake Lamb on a pop out.

Webb gave up another walk in the second inning and the Dodgers had runners on the corners with one out before Trea Turner grounded into a double play.

Webb settled down from there, giving up just three more singles until he was removed after six innings, giving up his one run on five hits and four walks.

Dodgers starter Tyler Anderson cruised through his first three innings before the Giants broke through in the fourth on singles from Evan Longoria, Thairo Estrada and Mercedes, the last of which brought home a run.

Anderson, a National League All-Star who did not pitch in Tuesday’s game, gave up one unearned run on four hits over six innings with two walks and six strikeouts. Alex Vesia (2-0) recorded one out in the eighth for the victory.

Bellinger’s grand slam was his 12th homer of the season and first since July 1. It was also the first grand slam for Los Angeles this season.