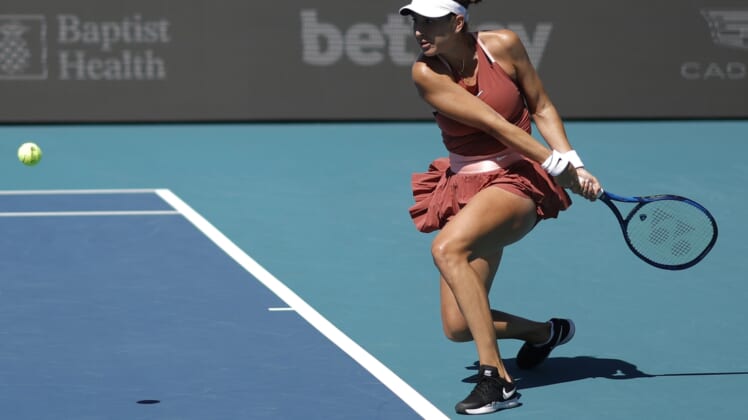 Bencic, the No. 22 seed, defeated Australia’s Daria Saville 6-1, 6-2 in their quarterfinal tilt. Osaka mirrored that result in the later match, toppling American ninth seed Danielle Collins 6-2, 6-1 in an hour flat.

Osaka said, “I’m glad I was able to get through quickly. I focused on trying to hit a lot of really good returns. This is actually my first night match too, so I didn’t know what the conditions would be like.”

Bencic and Osaka will meet in the semifinals later this week.

It is Bencic’s first semifinal appearance at a WTA 1000 tournament since the 2019 Mutua Madrid Open and her first ever in Miami.

Osaka, though unseeded, continued a torrid run at the tournament that also included victories over German No. 13 seed Angelique Kerber and American Alison Riske.

She smashed 13 aces against Collins while capitalizing on Collins’ seven double faults. Osaka won 21 of 24 first-serve points (87.5 percent) and went 5-for-7 in break-point opportunities.

Tied 1-1 in the second set, Osaka broke Collins’ serve to propel her toward winning the final five games of the match.

Collins, who will return to the top 10 in the WTA rankings next week, took a five-week break due to a viral illness before returning to competition at Miami. She also battled neck pain earlier in the tournament.

The quarterfinals will continue Wednesday when No. 5 seed Paula Badosa of Spain will face No. 16 seed Jessica Pegula of the U.S. and No. 2 seed Iga Swiatek of Poland battles No. 28 seed Petra Kvitova of the Czech Republic.