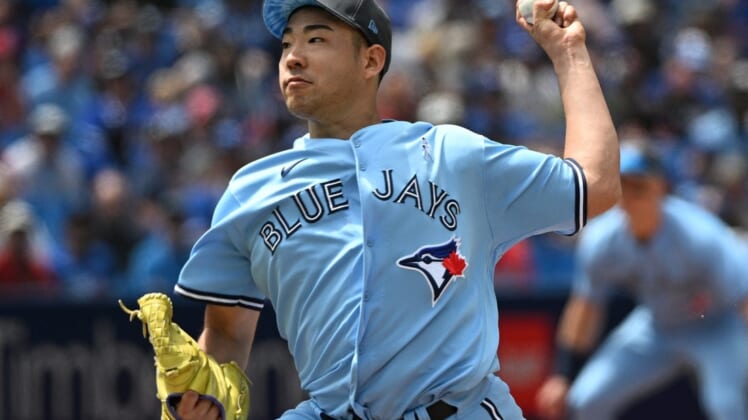 Corbin Burnes will look to continue his dominance of American League opponents when the Milwaukee Brewers host the Toronto Blue Jays on Saturday.

The sole loss came on April 3, 2021, when the right-hander allowed just one run across 6 1/3 innings against the Minnesota Twins. Since then, he’s allowed just four runs in six quality starts.

However, the Blue Jays are a different beast, one that Burnes has yet to conquer. Saturday will mark his first career matchup vs. Toronto, and its offense did not hold back in the series opener on Friday night.

The Blue Jays had 13 hits to cruise past Milwaukee 9-4. The second inning alone would have gotten the job done, as Toronto scored five runs thanks in large part to a three-run double from Matt Chapman.

All five runs came off starter Adrian Houser, who suffered his eighth loss of the season.

“He missed in the middle of the plate, and when you do that they hit some balls hard,” Brewers manager Craig Counsell said. “It was a big inning and going against a pitcher who was pretty tough.”

That tough pitcher was Alek Manoah, who surrendered just two runs on five hits through 6 2/3 innings. Yusei Kikuchi (2-3, 4.94) will try to replicate Manoah’s strong performance when he clashes with Milwaukee for the first time in his career.

Kikuchi has not picked up a win since May 16. The southpaw went six innings in that victory, but since then, he hasn’t pitched more than five innings in each of his last six starts.

“He just needs to throw strikes,” Blue Jays manager Charlie Montoyo said. “At the end of the day it’s about throwing strikes, and with somebody with the stuff that he has, that’s all it’s going to take. Because he’s got good stuff, and when he does throw strikes, he gets people out.”

The offense tasked with supporting Kikuchi might be without one of its hottest hitters in Alejandro Kirk, who exited Friday’s game with a left-hand contusion. Kirk went 4-for-4 in the win and is 7-for-14 (.500) during Toronto’s current six-game trip.

He underwent X-rays that came back negative, but he is still listed as day-to-day.

On the other hand, the Brewers will look to keep Kikuchi in his rut, and they might be able to do so on the shoulders of Willy Adames.

The Blue Jays once were a familiar foe for Adames, who spent four seasons playing against them in the AL East when he was with Tampa Bay.

He enters Saturday’s contest with a .327 career batting average against Toronto, with six home runs and 24 RBIs in 45 games. He was held in check on Friday, though, going 0-for-5 with a strikeout.