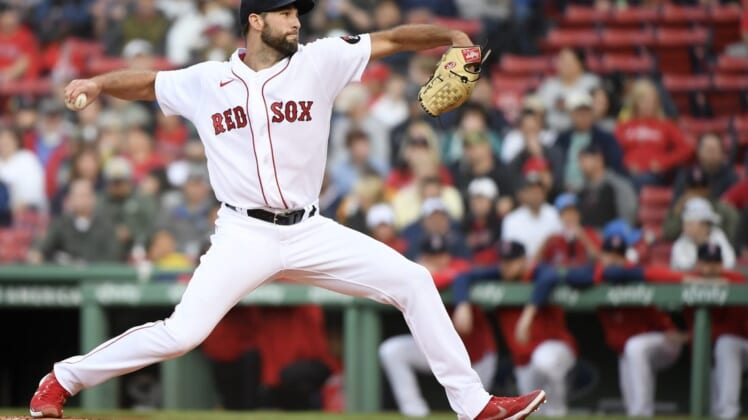 Complete-game shutouts in baseball have nearly gone the way of the dinosaurs.

That should tell you how impressive Michael Wacha’s most recent outing was.

Wacha (4-1, 1.99 ERA), who is scheduled to start for the Boston Red Sox on Saturday night at Seattle, threw a three-hitter Monday in a 1-0 victory against the host Los Angeles Angels. The right-hander walked one and struck out six in posting only the second shutout of his career.

“I mean, you’ve got to have confidence in this game to get it done,” Wacha said. “I feel like with what my pitches are doing right now and how it’s playing against certain hitters, if we can get early outs and get the strikeout whenever we need it, things like this can happen.”

It was the Red Sox’s third complete game this season, the most in the majors.

Wacha sought out Nick Pivetta and Nathan Eovaldi — who threw the Red Sox’s other complete games — after the game.

“I told them going through the high-five line, ‘I was just trying to be like you guys,'” said Wacha, who signed a one-year, $7 million contract in the offseason after going 3-5 with a 5.05 ERA last season for Tampa Bay.

It was the first 1-0 shutout for a Boston starter since Curt Schilling in 2007. And the Red Sox’s first shutout of any kind since Chris Sale threw one on June 5, 2019.

“He’s done it before,” Red Sox manager Alex Cora said of Wacha, who was an All-Star with St. Louis in 2015, when he went 17-7 before a long string of injuries limited his effectiveness.

“Like I always said, he comes from an organization that, they love that stuff,” Cora added. “(Adam) Wainwright is still pitching. He learned from them, and when he gets the ball, he wants to go as deep as possible. We know that. There’s certain days it’s only six. (Monday) it was nine.”

Wacha hasn’t had much success against Seattle, going 0-3 with an 8.27 ERA in five starts. That includes a no-decision on May 20 in Boston, when he allowed two runs on four hits in 4 2/ 3 innings of what turned into a 7-3 Red Sox victory.

The Mariners are set to counter with rookie right-hander George Kirby (1-1, 3.38).

Kirby suffered his first career loss against the host Red Sox on May 19, a 12-6 defeat. Kirby allowed five runs on eight hits in five innings.

The Red Sox won the opener of the three-game series 4-3 Friday night as Bobby Dalbec, a Seattle native, broke a tie with a home run leading off the seventh inning.

Boston reliever Tanner Houck got Adam Frazier to line out with two outs and runners at second and third to earn his first save.

“I really like our game right now,” said Mariners manager Scott Servais, whose club has won four straight series. “We just couldn’t pick up the big hit we needed late (Friday). Frazier hit it right on the screws … that’s baseball.”