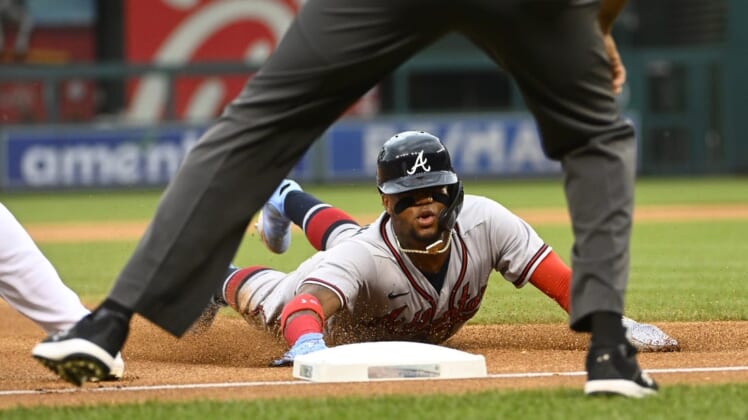 Wright (11-4) yielded two runs on seven hits while walking one and striking out four. Kenley Jansen allowed a homer and a single in the ninth before securing his 21st save.

The Braves spoiled Anibal Sanchez’s return to the majors. The 38-year-old right-hander was making his first appearance since 2020. After sitting out the 2021 season, he signed with the Nationals but sustained a nerve impingement in his neck at the end of spring training.

Sanchez (0-1) gave up four runs on four hits in five innings. He walked two and struck out five.

Josh Bell and Maikel Franco homered and Luis Garcia, Juan Soto and Bell had two hits apiece for Washington, which has lost seven straight and 13 of 14. Atlanta has won five of its past seven games.

Nelson Cruz’s RBI single in the eighth pulled the Nationals within 5-3, and Franco homered in the ninth to slice the deficit to 5-4.

Ronald Acuna Jr. walked leading off the first, and Swanson followed with a homer to left. It was Swanson’s 15th home run of the season and the 12th of his career at Nationals Park — his high at any locale aside from Atlanta.

The Nationals quickly got a run back in the bottom of the first. Bell sent a 3-2 curveball into the second deck in right-center for his 13th home run.

Washington opened the second with three straight singles to load the bases. The tying run scored on Franco’s groundout before Wright retired Lane Thomas on a popup and Garcia on a groundout.

Sanchez allowed a pair of singles to open the fifth, but after Robinson Cano grounded into a double play and Harris fell behind 1-2 it looked like the Nationals pitcher might escape unscathed. However, Harris fouled off four more pitches and deposited a 3-2 pitch — the 10th pitch of the at-bat — into the seats in right-center to make it 4-2.

In the bottom of the fifth, Washington got three consecutive one-out singles, but Harris fielded Soto’s hit on one bounce in left=center and fired home just in time to retire Garcia.