Behind Gerrit Cole, Yankees go for series sweep of Guardians 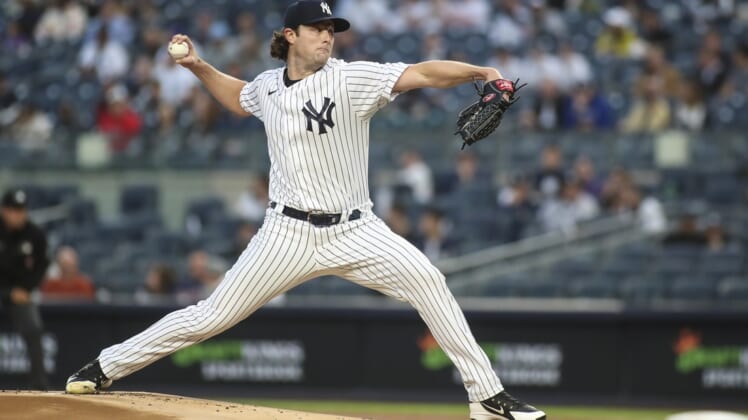 Gerrit Cole stood at his locker and spent a few minutes Saturday morning dissecting the reasons for his slow start.

Coming off the shortest start of his career, Cole hopes to start turning things around Sunday afternoon when the New York Yankees host the Cleveland Guardians. The Yanks go for the series sweep in front of what they hope is a more civil crowd.

The Yankees are 4-1 in their past five games after rallying twice for a 6-5 victory on Saturday on RBI hits by Isiah Kiner-Falefa and pinch hitter Gleyber Torres in the ninth inning off Cleveland closer Emmanuel Clase.

While the Yankees celebrated the victory, they also spent most of their postgame interviews discussing the behavior of some fans in the outfield seats.

During the ninth, fans pelted Cleveland outfielders with bottles. They also heckled rookie Steven Kwan after he crashed into the left field wall trying to track down Kiner-Falefa’s double and threw bottles at right fielder Oscar Mercado following the final hit.

“You certainly don’t want to put anyone in danger. I love the intensity, but you can’t be throwing stuff out on the field,” Yankees manager Aaron Boone said.

Instead of the usual celebration, Yankee stars Aaron Judge and Giancarlo Stanton joined teammates trying to diffuse the situation.

“They need to be held accountable and I think there should be rules set up for that because that’s ridiculous and that should not happen,” said Mercado, who also added he appreciated the gestures by Judge and Stanton.

Cole (0-0, 6.35) last pitched Tuesday in Detroit when he lasted a career-low 1 2/3 innings and allowed two runs on one hit and issued five walks. He threw 68 pitches, including 46 in the second inning. He threw just 37 strikes before being pulled.

Cole said he was trying to make perfect pitches after getting feedback from teammates and coaches while watching the footage.

“We were going for really perfect pitches I think probably too often, and I think that just in some certain situations if I just attacked the zone better, we would have been in a better spot,” Cole said.

Cole, who finished second in the AL Cy Young voting last season, also owns a 7.14 ERA over his past six regular-season starts. He is allowing opposing hitters to bat .308 (4-for-13) against him in the opening inning of his three starts this season.

Cleveland is trying to salvage the finale after blowing a pair of leads and seeing Jose Ramirez go 0-for-8 to lower his average from .429 to .364. The Guardians may also be without Kwan, who had cuts on his chin and forehead.

Aaron Civale (0-1, 6.14), who has allowed four runs in each of his first two starts, goes for Cleveland. Civale pitched 3 1/3 innings April 11 at Kansas City and then went four innings on April 17 in an 8-1 loss to the San Francisco Giants.

Civale is 1-1 with a 2.08 ERA in three career starts against the Yankees. He beat them Sept. 18 in New York when he allowed four hits in six scoreless innings of an 11-3 victory.