First-rounder Justin Fields was also sidelined for Wednesday’s practice due to a groin injury, and defensive tackle Eddie Goldman (back) wasn’t available.

Head coach Matt Nagy said the goal for the back procedure performed Wednesday is to address Jenkins’ known issue that caused the former Oklahoma State offensive tackle to fall in the 2021 NFL Draft.

Nagy, who said after the draft the team was “well aware” of Jenkins’ history of back problems, said Wednesday the “goal is to get him back this season.” 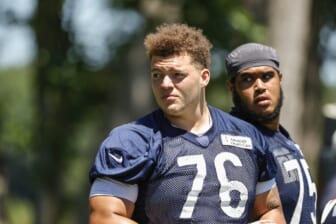 Rarely on the field since being drafted, Jenkins was slated to start at left tackle. The Bears traded up in the second round to land Jenkins, and three days later released mainstay starter Charles Leno Jr., who hadn’t missed a game since becoming a starter in 2015.

The Bears agreed to a deal with Jason Peters, but he’s unvaccinated and subject to a five-day waiting period before he can join the team.

Peters, 39, is a nine-time Pro Bowl pick and said following last season he felt there was more in the tank for an 18th season. He played in eight games last season with the Philadelphia Eagles.