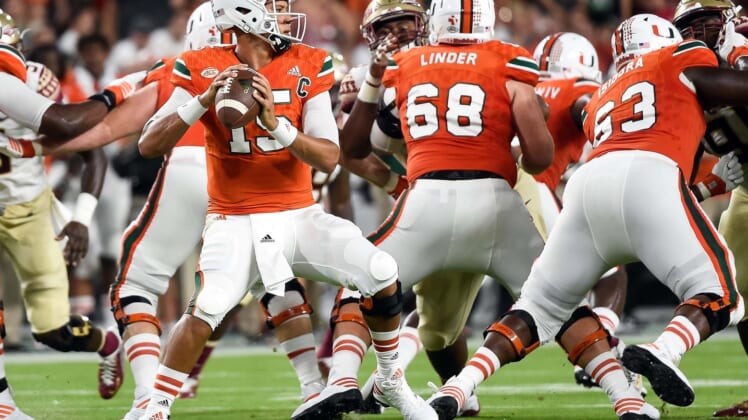 It’s pretty much a given at this point that the Chicago Bears and Jay Cutler are parting ways at the end of the 2016 NFL season. What is yet unknown is who the Bears might replace Cutler with, though an interesting name has surfaced on this count. Bleacher Report’s Matt Miller noted in his weekly scouting notebook that Miami’s Brad Kaaya has piqued the interest of the storied franchise.

“The Chicago Bears have been at the last two games and are asking about quarterback Brad Kaaya. A person close to Kaaya confirmed the news when asked and said he’s already spoken with general manager Ryan Pace about the quarterback.”

This is certainly an interesting player for Chicago to be targeting (at least potentially) as it moves on from the Cutler era.

One could argue that Cutler and Kaaya aren’t necessarily that much different from a raw skills perspective. A smooth passer with plenty of gun to get the ball anywhere on the field, Kaaya has been known to force the ball into tight spots at times. Accuracy and timing are his strong points when he’s getting protection. Unfortunately, he’s not at his best under pressure.

Here’s a great example of this, looking at his career-best five-touchdown game against Pitt.

Personally, it feels like Kaaya would do well to stay in school and continue developing his game for one more year. He has improved in terms of accuracy and decision making in each of his first three seasons at Miami. But he’s not ready to take on NFL defenses.

This was evidenced in his two worst games of the season against North Carolina and Florida State. He was under 60 percent in both those games, throwing two touchdowns and an interception in total.

Should Kaaya come out early and enter the 2017 NFL Draft, and should the Bears use a high draft pick to land him, it could mirror what the Buffalo Bills did a few years back with Florida State’s E.J. Manuel. Blessed with talent to succeed, Kaaya just isn’t quite ready for what the NFL serves up on a weekly basis.

Of course, if the Bears do decide to hand on to Jay Cutler with low expectations of what the team will accomplish again in 2017, then drafting Kaaya to hold a clipboard for a year might not be a bad idea.